Map route is an approximation and subject to change

An extremely enjoyable 3-day tour with many hstorical and scenic stops along the way.  Take a step back in time to explore Scotland's historic buildings that featured in the historical drama series 'Outlander' based on the ongoing novel series by Diana Gabaldon.  You'll follow in the footsteps of Jamie, Claire and the Jacobites as you visit some of the Outlander filming locations and learn of the factual history of the period too.  Begin the tour in Edinburgh and immediately head north for some Outlander connections before arriving in Highland Perthshire for the evening.  Explore Pitlochry town and travel south through the Sma' Glen to Stirlingshire to explore further and overnight.  Your last day takes in Blackness Castle near Edinburgh, the world-famous Royal Mile, and Rosslyn Chapel. 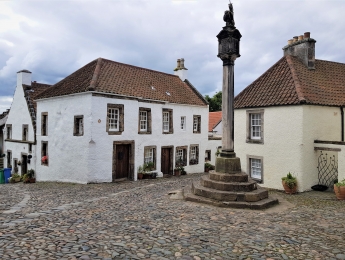 Your tour begins when your tour driver collects you from the arranged location.  This morning, we travel into the Kingdom of Fife to explore the ancient burgh of Culross.

Overlooking the Firth of Forth, the charming town of Culross is about as close to stepping back in time to the 18th century as is possible.  The rustic whitewashed, red-tiled buildings are well preserved, such as the Town House, where witches were tried and held while awaiting execution.  The Mercat area of the town was transformed into the village of Cranesmuir, home of Geillis Duncan and her husband Arthur, and behind the impressive historic Culross Palace is where you can find the gorgeous herb garden that Claire works.  It is planted with lawns, herbs and vegetables of the period.  After a look around the village and a tour of the Palace, we head north for the small village of Falkland.

Falkland was used as the filming location for Inverness in Outlander, and we will have our lunch stop here as well and spend some time seeing the village square and quaint shops along the way.  In the heart of the village lies Falkland Palace, a 16th century ‘pleasure palace’ of the Scottish Kings.  It is well known as the beloved residence of the Scottish monarchs and was one of Mary, Queen of Scots' favourite escapes from the political and religious turmoil during her reign.  Tour the palace and learn more about the Stuart Dynasty before we head north for the rugged highlands and the lovely village of Dunkeld on the banks of the River Tay.

The majestic Dunkeld Cathedral dominates this picturesque Perthshire village.  Today, part ruin and part parish church, the cathedral features the tomb of the notorious 'Wolf of Badenoch', and nearby are the brightly coloured 'little houses' of Dunkeld which were built in the early 1700s.  Most of the original town was destroyed during the Battle of Dunkeld when, in August 1689, the 26th Foot Cameronian Regiment successfully fought the Jacobites shortly after their victory at the Battle of Killiecrankie.  Have a look for the holes made by musket-ball strikes during the battle in the walls of the Cathedral.  Travelling a short distance, we arrive at the Victorian town of Pitlochry that benefits from a lovely setting on the River Tummel, backed by Ben Vrackie. 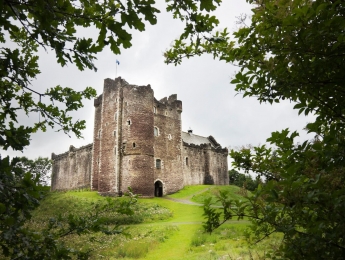 This morning we wake to Pitlochry where we will take time to explore this charming Victorian town.  In 1842 Queen Victoria visited Perthshire on one of her grand tours and her favourable opinion of the area caused the town to be more widely noticed.  Pitlochry boasts a vast array of interesting shops and buildings built in the Victorian Scottish Baronial architecture style which gives the town a very special character.

If desired, we will have the opportunity to visit one of Scotland’s smallest distilleries for some much-needed whisky tasting.  Dating back to 1825, Edradour stands alone as the last stronghold of handmade single malt whisky from a farm distillery still in production today.  Their commitment to retaining authentic small-scale production provides an unforgettable experience.  A wee dram awaits you on your tour where you will see whisky being made first-hand.  When we are ready, we will tour south to Drummond Castle Gardens via Crieff.

Our journey takes us through the ‘Sma Glen’ - a scenic glen in central Perthshire with the fast-flowing River Almond running along the narrow valley floor.  Viewed as one of Europe’s and Scotland’s most important and impressive formal gardens, the spectacular Perthshire gardens of Drummond Castle date back to the 17th Century.  The gardens were redesigned and terraced in the 19th Century and the formal gardens that can be seen today were largely replanted in the 1950s.  The ancient yew hedges and the remaining beech tree planted by Queen Victoria, commemorating her visit in 1842.   The beautiful formal gardens of this historic castle were used as the park and orchard of the Palace of Versailles in Outlander Season 2.  Our next stop is Doune Castle near Stirling.

Once a royal residence, Doune Castle is full of charm with its 100 ft. high gatehouse and stunningly preserved great hall.  Outlander fans will recognise Doune as Castle Leoch, home to Colum MacKenzie and his clan in the 18th century episodes.  It also features in the 20th century episode where Claire and Frank visit the castle in ruins on a day trip.  After a full tour of the castle, we will make our way to Stirling for our overnight stop.

Stirling is one of Scotland's most historically important sites and was once a favoured residence of the Stewart kings and queens.  A site as important as this, guarding the lowest crossing point of the River Forth, would always have been of strategic interest to anyone wanting to control central Scotland. 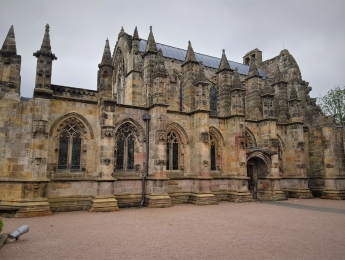 This morning we head for the formidable fortress of Blackness Castle which stood in for Fort William in Outlander Series 1.  In the past this 15th century castle was never just a peaceful lordly residence, its enduring roles were as a garrison fortress and state prison.  Situated in a stunning location on the southern shores of the Firth of Forth, it is dubbed the ‘ship that never sailed’.   After a tour of the castle, we will head for Edinburgh for some time in the Royal Mile.

Wandering down the Royal Mile, explore the architectural delights whilst taking in some of the city’s Outlander locations.
Bakehouse Close - This wee alley starred as Carfax Close where Jamie ran a print shop.
World’s End Pub - The best place for an Outlander themed drink.  Jamie rescues his associate, Mr Willoughby, from getting into trouble in this pub and where Jamie secretly meets to keep his illegal smuggling business running.
Canongate Kirk - This Dutch style church opened in 1691.  In Dragonfly in Amber, Colum Mackenzie meets Claire and Jamie to speak away from the Palace of Holyrood House.
Holyrood Palace - a must-see sight at the bottom of the Royal Mile where the British Queen stays during official visits to Scotland.  Jamie and Claire stayed in the palace with Bonnie Prince Charlie as his trusted supporters.


Following a walk and lunch in the city, we travel a short distance out of the city for a leisurely visit to 15th century Rosslyn Chapel, made famous by Dan Brown's book ‘The Da Vinci Code’.  Built between 1446 and 1484, the chapel has been described as an ‘Architectural Wonder’ and a ‘Library in Stone’ as practically every surface of Rosslyn Chapel is covered with carvings of individual figures and scenes from this timeline.  The chapel really is a ‘must see’ whilst in the area.

After a tour of the chapel, we make our way back to Edinburgh city which marks the end of the tour.

Award-winning small group tours.
Our standard tours have a maximum of 8 passengers per vehicle.

Craft the journey that you want with a custom tour.

We include hand-picked accommodations as standard to ensure you get to see just how great Scottish hospitality is.

We keep your interests and budget in mind.

We’ve spent over 20 years providing visitors with unique tours of this stunning country.