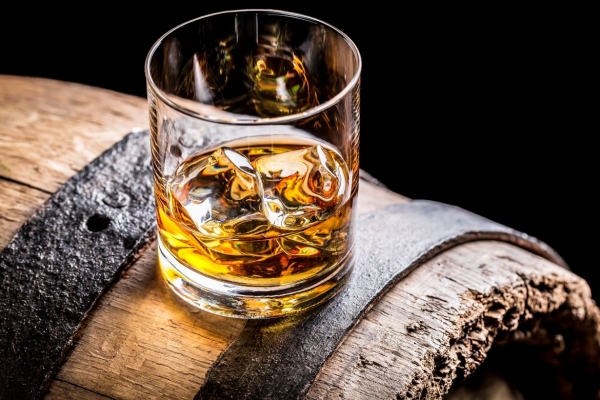 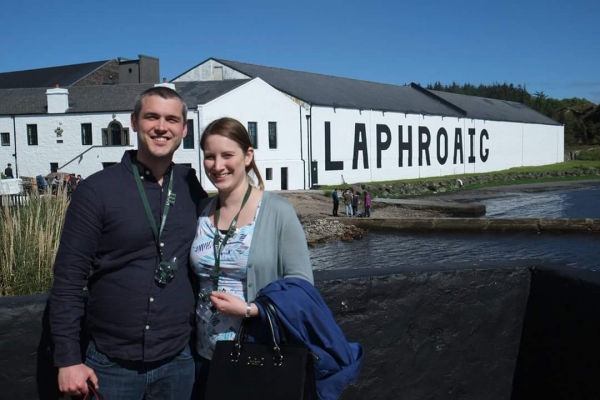 Whisky is an integral part of Scottish culture; our economy depends on it and baptisms, funerals and every celebration in between would not be complete without it. Having a good whisky really makes an event feel special. It is the life-blood of many communities in Scotland, bringing work and tourism to the local towns. The whisky distilleries are Scottish institutions and are well known for their charitable activities.

I know what you are thinking, that’s all very nice, but which whisky tastes the best? Well that is strongly contested! I’m not going to try to answer that question here, especially as this is really a matter of personal preference. Instead I’ve listed 10 brilliant distilleries I would recommend you visit during your tour of Scotland.

The first distillery on our list is Oban which was founded in 1794. The most fascinating thing about Oban is that the distilling process has remained the same for over 200 years. Despite new technologies and distilling methods being invented over the past few centuries, the Oban distillers remain confident that their original method, is the best method.

Did you know Oban has its very own colosseum? It is not quite as grand as Rome’s, but McCaig’s Tower is well worth a visit and its elevated location means a walk to the monument provides fantastic views. It was build in 1897 by John Stuart McCaig who wanted to create a monument in honour of the McCaig’s while creating work for the local tradesmen. Rather than the royalty who usually build this kind of structure, John McCaig was actually a local banker.

While in Oban, I would also recommend a visit to Ganavan Sands - a gorgeous beach with views across to the Isles of Mull and Lismore. 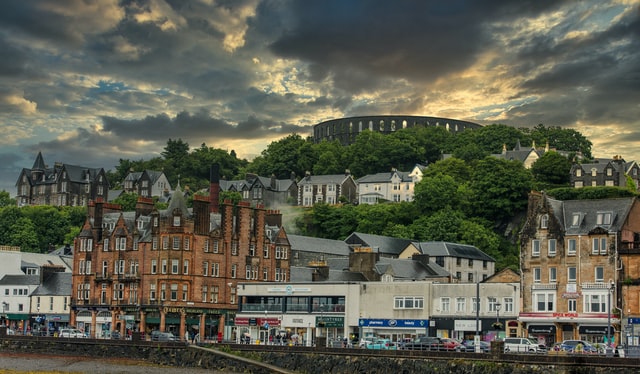 There are a number of whisky distilleries on Skye but Talisker is one of the most famous, as well as the oldest. It is on the beautiful Loch Harport and boasts fantastic views of the Cuillin mountains. However, this is a wild and sometimes harsh landscape and this is reflected in the taste of Talisker whisky, described as ‘deep and elemental’. The Talisker tour will give you insights into the history of the distillery and its strong connection to the sea.

We would always recommend you have a decent meal before sampling whisky (even a few small drams can have an effect!). So what is the best type of food to prep you for a sea-inspired whisky? On Skye, its has to be lunch at the Seafood Shack! As the name portrays, this isn’t a sit down fancy eatery you would normally associate with top class seafood; the eating area is a covered space with old whisky barrels to rest your food upon so it has a nice relaxed atmosphere. The food is some of the best seafood I have ever eaten - expect hearty portions and flavours you can only get from the very freshest of fish. There is a shop too, so you can pick up some tasty souvenirs. Edradour is Scotland’s smallest traditional distillery and it has been around since 1825. Despite its size, Edradour offer a wide range of whiskies so you are bound to find something to your taste. On their website they have a digital visitor book which is a nice touch. The notes left by previous guests will really encourage you to visit this charming little distillery.

If you like to ‘earn your whisky’ the walking in the Pitlochry area is some of the best in Scotland. The Perthshire forest are thick and green with tall trees, rolling hills and captivating valleys. The Walkhighlands website is a great place to find local walks, the first on the list, Falls of Bruar is one of my favourites in the area. 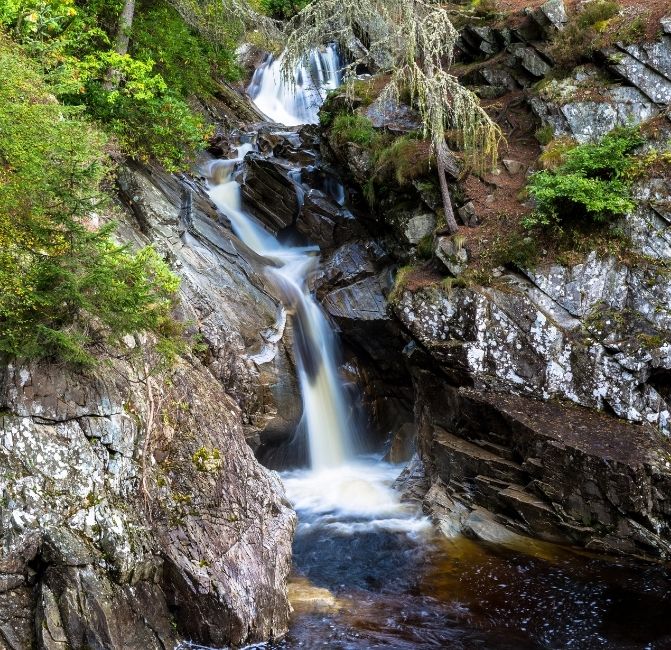 Glenfiddich is one of the most famous whisky distillers in the world. Their tours are top class as their staff are very knowledgeable about the distilling processes and whisky tasting. They also serve delicious meals and afternoon tea on the Robbie Dhu Terrace & Whisky Lounge, I’d recommend planning to have a meal while you are there.

Glenfiddich is Gaelic for ‘Valley of the Deer’ so as you can imagine it is set within a beautiful part of Scotland with plenty of wildlife. If you would like to see some wildlife up close, visit the Speyside Falconry and meet some of Scotland’s most beautiful birds of prey. On some of their experience packages they will even give you a Falconry Glove and show you how to get the Owls and Hawk’s to land on your arm!

If history is more your thing, check out Auchindoun Castle and Balvenie Castle - both are ruined castles but a good portion of their walls and turrets are still standing so there is plenty to see at both. Glengoyne is distilled very slowly, in fact, it has the longest distilling processes of any malt whisky. This gives it a complex and fruity taste.

It is situated at the foot of Dumgoyne - a beautiful but steep hill very near to Glasgow. I have a special place in my heart for Glengoyne because I could see Dumgoyne hill from my childhood bedroom window. I think I probably had the best view in the whole of Glasgow!

This means that it is one of the easiest distilleries to get to from our central cities, but it still has that great countryside setting you are looking for. It is a good option if you are only visiting Scotland for a few days. Some people spend the morning hiking up Dumgoyne, then head to the distillery and reward themselves for their efforts with a wee dram. The island of Islay is famous for distinctive, strong and peaty whisky. Caol Ila is the largest distiller on the island. Of course the best thing about a tour here is tasting their powerful whisky, however, the panoramic views over to the Paps of Jura come in at a close second. Jura is the neighbouring island and the ‘Paps’ are the rugged hills that dominate Islay’s sister island. There are 3 different tour options at Caol Ila, one includes a whisky and chocolate tasting. If you have a sweet tooth, this is the distillery for you!

Coal Ila is situated in Port Askaig, where you can take the ferry crossing to Jura if you are enjoying some island hopping as part of your tour. It is also near Finlaggan - a loch with islands home to the ruins of a castle and other buildings. The name ‘Lord of the Isles’ may sound like something from fiction, but this is indeed the name that was given to the chiefs of Clan MacDonald who were inaugurated at this site during the 14th and 15th century (although some of the remnants are thought to be even older). You can find out more about the history of Finlaggan at the nearby visitor centre. The site itself is accessible at all times but make sure you check the visitor centre opening times before you go, as it is generally closed in the winter and on Sunday mornings. 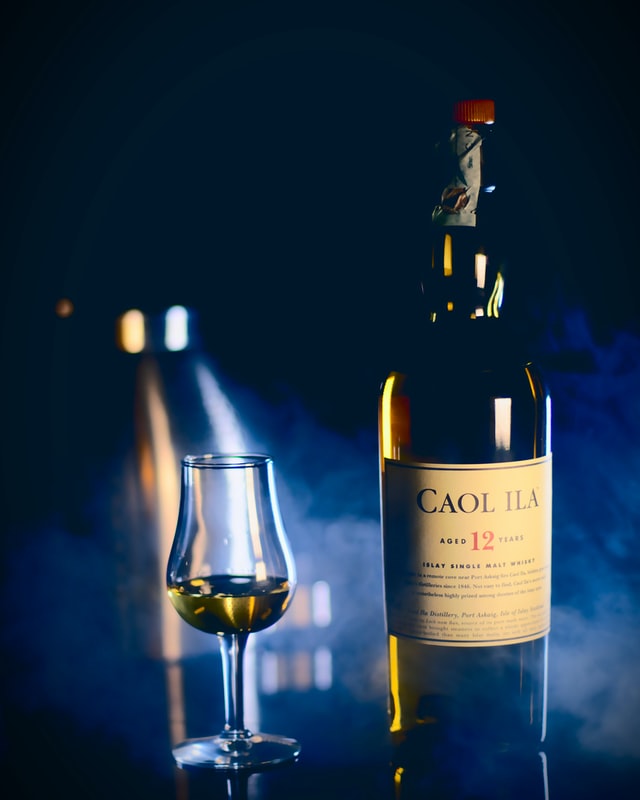 Another fantastic Islay distillery, Bunnahabhain is known for being the un-peated Islay malt. They describe a visit to their remote distillery as a ‘pilgrimage’ and it is quite a journey via the challenging hilly road. However, before 1960, there was no road at all and the distillery could only be reached by boat. Pre-60’s they relied fully on the trade of seafarers. Although boats no longer dock at Bunnahabhain’s peer to deliver and collect supplies, their logo pictures a hardy looking Captain steering his ship, paying homage to their past.

They have a great range of whisky, including the 46 Year Old which must have been distilled for longer than many of the staff have worked at Bunnahabhain! It is described as 'elegant and complex’ with ‘citrus and heather honey balanced with ginger and roasted nuts to create a silky but spicy malt.’ Intriguing…

Bunnahabhain is in the north of the island, and if you head a few miles further north right to the tip of Islay, you’ll find Ruvaal Lighthouse. Ruvaal has terrific views and if you keep an eye on the shoreline you might be lucky enough to spot otters and seals. Its history involves an exciting helicopter crash. In 1981 the pilot trying to install mains power to the lighthouse crashed into one of the power line poles. Thankfully the pilot made a miraculous escape and he didn’t even sustain any serious injuries. 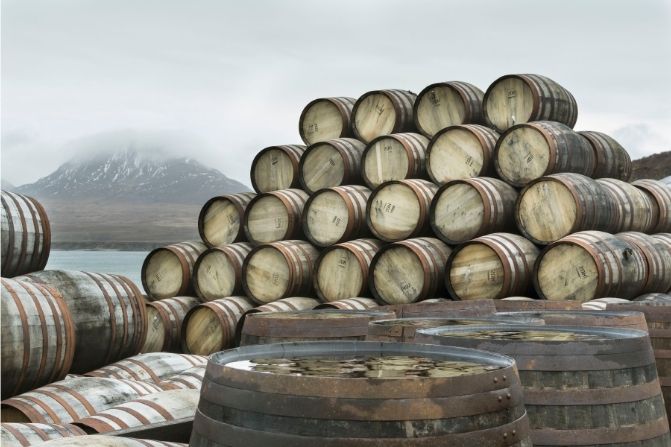 Arran is my favourite place to shop for traditional Scottish products. Make sure to head to Arran Cheeses and Arran Aromatics - both in the same little shopping court. There is also a great chocolate shop in Brodick - James of Arran (a.k.a. the Arran Chocolate Factory).

Once you have filled your belly with cheese and chocolate, head north to Lochranza for the distillery tour. The Arran Whisky tour is informative and really good fun. The staff will make sure you enjoy yourself and you get to taste a fair few of their whiskies (I’d recommend having a good meal beforehand!) Make sure you sample the award winning Arran Gold Whisky Cream Liqueur, absolutely delicious and the perfect nightcap to accompany a cold winter night cosied up beside the fireplace.

As distilleries go, Arran is an infant, with their Lochranza site being less than 25 years old and their second site in Lagg having opened in 2019. Despite Arran’s youth, it still holds its own amongst our ancient whiskies. I really have a soft spot for Arran and the village of Lochranza is beautiful. It is a remote part of the island with a small ferry port, a golf course and a castle. For such a small place, it has all the things us Scots are famous for (I’m sure you’ll see the occasional kilt too!). 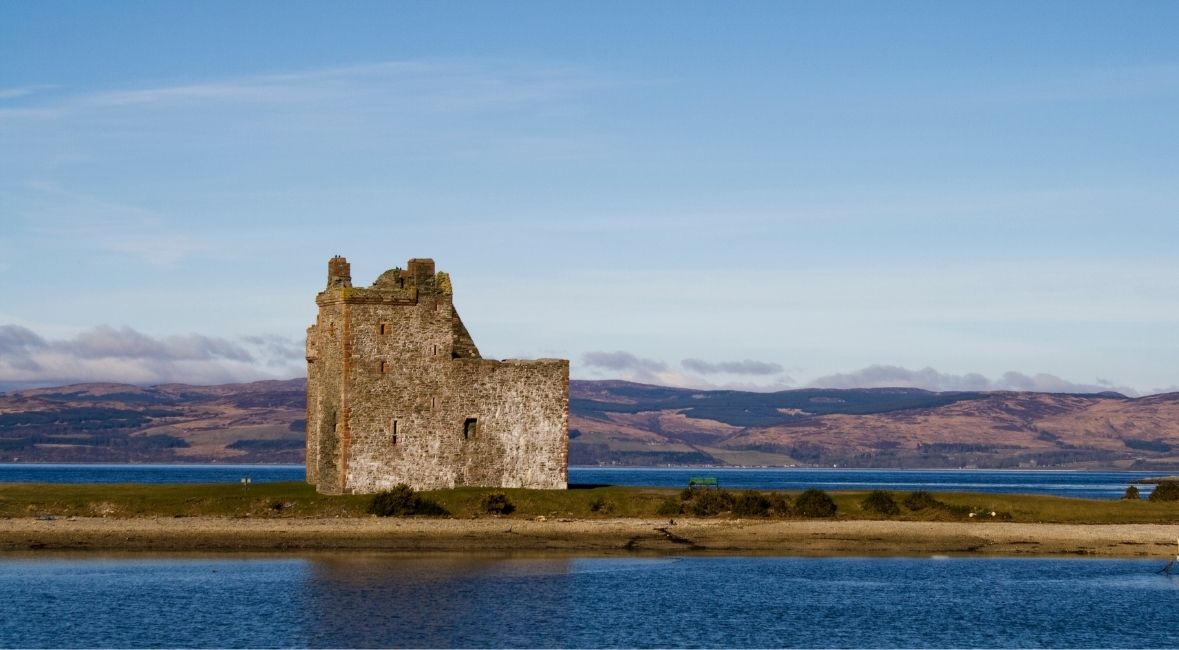 “We’ve been dividing opinions around the world since 1815” - Laphroaig think of themselves as the marmite of whisky. They describe their process by saying “The Kilbride Stream, hand-cut peat, floor malted barley, cold-smoking kilns, mash tuns, copper alchemy and the subtlety of oak ageing” - quite a mouthful. It does indeed sound like a fairly tough whisky, not for the faint of heart perhaps. Wondering if you’ll like it? There is only one way to find out…

Laphroaig is near to another of Islay’s famous lighthouses - Carraig Fhada. This is a very beautiful lighthouse; the architect clearly had some artistic flare. It remains very bright which makes me think it must be painted regularly to keep it looking at its best. Characteristic of the lowland whiskies, Kingsbarns is a lighter malt than most of its northern neighbours. In 2020 they won the Best Scotch Lowlands Single Malt at the World Whisky Awards. They say their lighter but complex flavour compliments the Neuk of Fife which they call their home, and I couldn’t agree more. The relaxed, golden beaches and charming fishing villages are the perfect places to take a seat with a sea view and sip a soothing, delicious malt.

Just across the road from the distillery is the colourful Cambo Estate and Gardens. The gardens are run by a charity and provide learning and engagement programs for children, young people, and supported adults. If you happen to be touring Scotland during the shoulder season, don’t be put off from visiting. One of the best times to visit is during their snowdrop festival which takes place in February and early March every year. Does this have your taste buds tingling? Thinking about how much better that peaty whisky will taste when you have a stunning view of the Scottish Isles? Then check out our 5 Day Whisky Tour and our 10 Day Whisky Tour. Join us for a truly Scottish experience.