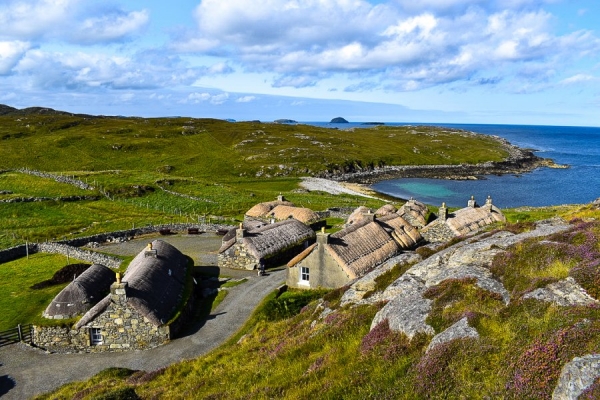 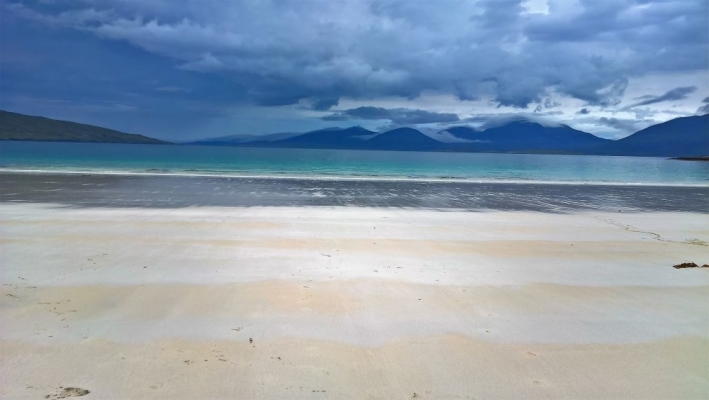 A Magical Visit to Harris and Lewis

There are many enchanting islands all along the coast of Scotland, but Harris and Lewis are top of many people’s list. Not least because of their magnificent beaches. I visited the islands this summer and decided to do plenty of ‘beach-hopping’. I started at the top of Lewis and worked my way down to Luskentyre - the famous beach that regularly features in the ‘top 10 beaches in the world’ lists. Each beach I visited was more splendid that the last. Our penultimate beach stop was Ardroil Beach, halfway down the west coast of Lewis. As we were leaving I exclaimed ‘There is no way Luskentyre can be more beautiful than this!’ Oh how wrong I was…

Time to set off on a two-day tour of Lewis and Harris! There are various routes onto Lewis and Harris. You can fly from Glasgow, Edinburgh or Inverness, but most visitors take the ferry from Ullapool into Stornoway or from Skye to Tarbert. If you are touring you may decide to go in one port and out of the other to enable you to see more of Scotland. This is something we often do at Best Scottish Tours to so that we can show you as much of Scotland as possible! For the purpose of this blog, we will take the route into Stornaway and the return trip from Tarbert, over the sea to Skye.

So where do we start? You’ll probably be feeling fairly peckish after the 2h 45 minutes the ferry takes from Ullpaool to Stornaway. For the best food in Lewis’s capital, I’d recommend heading to The Boathouse at the Royal Hotel. Make sure to book in advance as it can get pretty full, particularly just after a ferry has docked. This is also a great place to stay overnight after your first day of touring around Lewis.

The Butt of Lewis

After a hearty lunch, venture north to the Butt of Lewis - the most north westerly point in the Hebrides. It is marked by a tall lighthouse. This is an exhilarating viewpoint; when I visited I sat down on the cliff’s edge, looking out at the waves crashing against the sharp, black rocks jutting out of the sea. I really felt like I was sitting on the edge of the world.

Just before you reach the lighthouse, a small beach will suddenly appear on your right-hand side below the cliffs. I challenge you not to say ‘Wow’ when you see it! Stoth Beach is an inlet with stunning golden sands and remarkably turquoise waters. Whether you sit on the beach itself or stay up top and look out from the cliffs above, this is a view that’s hard to leave. I have visited the Blackhouse Village a couple of times and it is one of my favourite historic sites in Scotland. I wouldn’t call myself a history buff by any means, but I found the information about life in the Blackhouses throughout the generations fascinating. So even if you are more of a beaches and mountains kind of person, it is well worth a visit.

The highlight of this site is of course that wonderful view over the tops of the cottages, out to sea, but the working Harris Tweed loom comes in at a close second. There are museum exhibits in a few of the cottages, and in one you will sometimes find a man weaving Harris Tweed which is later sold locally. He was happy to give us a demonstration and told us all about the process for making Harris Tweed. Best Scottish Tours guests always love seeing him in action! In the next Blackhouse, there is a video giving more details about Harris Tweed and life through the ages in the villages around Gearrannan.

If you head to their website, you will see that you can actually stay in the Blackhouses as some have been converted into self-catering accommodation. A pretty cool place to rest your head for the night! If you’d like to learn more about the island’s historic weaving culture, the Carloway Mills are just a 2 minute drive from the Blackhouses. The Mills take visitors on an immersive journey detailing everything the weavers hold dear. Harris Tweed isn’t just a ‘product’, it is a way of life for many islanders. This excerpt from ‘From the land comes the cloth’ showcases this beautifully through the words of Donald John MacKay - “My inspiration is my surroundings, the landscape. A lot of the colours we use reflect the landscape from the window. I try and convert the colours I see from nature into the tweed.”

Harris Tweed’s evolution into a material seen on bags, catwalks and in shops around the world, didn't happen by accident. The residents of Harris and Lewis are fiercely proud of their tweed and each generation has thought carefully about how they can leave the very best legacy for future weavers. The Carloway Mills tell a story of rich colours, influenced by the landscape and unique methods of creating their cloth, but at it its heart this is a story of people, families and community.

The Calanais Standing Stones have stood on the island for over 5,000 years. This mysterious site consists of around 30 large stone slabs which have been placed in the shape of a cross with a central circle. This isn’t a Christian symbol, however. The stones are believed to be linked to astronomy. There are actually many more stones nearby rather than just at the main site. No one knows exactly why they were placed there or by whom, but they are thought to have been used for Pagan or Druidical rituals for hundreds if not thousands of years. For your last stop on Lewis I’d recommend the stunning Ardroil Beach. It has a lovey bay surrounded by hills, with shallow waters perfect for paddling in. This beach (or one of the beaches nearby) is the site of an important historic discovery. On your way to Ardroil keep an eye out for a large wooden statue of a chess piece. This is to commemorate the discovery of 93 chess pieces and tablemen which were uncovered after a storm blew away the sand and dirt from where they were hidden. The chess pieces are made of walrus ivory and sperm whale tooth, and they are believed to have been made in Norway in the 12th century. The actual chess pieces are on display at the National Museum of Scotland in Edinburgh. I’ll never forget the moment I first saw Luskentyre Beach. I drove over the brow of a hill to be greeted by long glistening white sands running down either side of clear aqua sea. It is a truly dazzling site and walking along this illustrious beach is like a dream.

Despite visiting in the middle of August, peak holiday season, it felt like we had the whole beach to ourselves at times. The areas near to the beach car parks are busier, but walk a couple of miles along the sands and you're likely to find yourself without a single soul in view. It is a very special place, I’ve never been anywhere like it. Many of our guests tell us this was their favourite place out of everywhere they visited on their tour. While photos can look spectacular, you can’t really grasp the size or indeed the splendour of this beach until you see it in person. So don’t rush your trip here, get up early to give yourself plenty of time to explore. A great spot for lunch on the southern coast of Harris is The Anchorage - a top class seafood restaurant featuring charming local artwork. I would really recommend the Harris Gin Hot Toddy. A lemony, cup of warmth, perfect to shake of that strong Harris breeze! I had the lobster here which certainly wasn’t cheap, but it’s the best lobster I’ve ever had. You could really taste how fresh it was… and it was huge!

Book yourself onto a late ferry, as this gives you time for a bit of shopping in Tarbert after lunch. Check out Essence of Harris for the most delectable fragrances in all of Scotland. Their diffusers are the perfect way to bring a little part of your vacation home with you to enjoy every day (for a few months at least!). They also have a lovely selection of candles and hand lotions.

There is a Harris Tweed shop just a few minutes walk away, another great place to find souvenirs. There are larger items like bags, jackets and waistcoats, but if you are looking for something smaller, there are plenty of accessories such as purses, gloves and wallets with the latter being a very popular choice. Finally make your way to the Harris Gin Distillery - the gin that has taken Scotland by storm since it first opened in 2015. Their long-term plan is to produce a Harris Whisky, but as it takes many years to distil, they decided to launch a gin in the meantime… I don’t think anyone could have predicted how successful their “while we’re waiting” product would be!

The gin tastes fantastic and it is bottled in the most beautiful twisted glass. People actually keep and sell their empty bottles on Ebay to crafty types who convert them into lamps, usually with a Harris Tweed lampshade. You can take a tour of the distillery which lasts just over an hour. If there are still some daylight hours left after you have had your shopping fix, a drive along The Golden Road is a great way to end your vacation. The road winds around the rocky eastern coast of the islands and there are lots of picturesque cottages, small lochs and tiny harbours along the route. The weather had taken a turn for the worse when we visited, but I think the moody skies added to the atmosphere of this remote peninsula. It looks like it should feature in a murder mystery series, with a grumpy police detective who has taken a job as far away from home as possible to escape his past. It is a somewhat tricky drive, so if the weather is really bad or you are visiting in winter, it is perhaps best avoided. The Golden Road, Isle of Harris

And then it is sadly time to leave the tranquility of these cheerful islands and head back onto the ferry. Thankfully however, the next stop is the Isle of Skye.