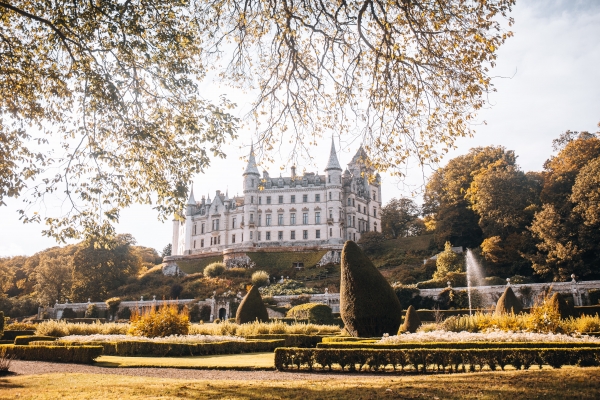 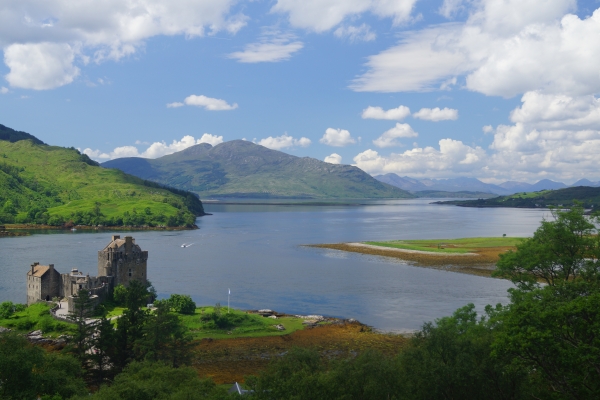 A Tour of Scotland’s Castles

Castles! Scotland is full of them. A few are still lived in to this day and have been kept in near perfect condition by our Earls and Duchesses. There is so much to see: rooms laid out with lavish furniture replicating the lifestyle of our regal ancestors; paintings, jewellery boxes and toys dating back hundreds of years. Often parts of the original castle’s structure has been kept and restored. However, it is our old ruined castles that I find the most fascinating so we will be sure to visit these. Let me take you on a tour of Scotland’s most famous clan strongholds.

Take a look at our 5 Day and 10 Day Malt Whisky & Castles Tours. 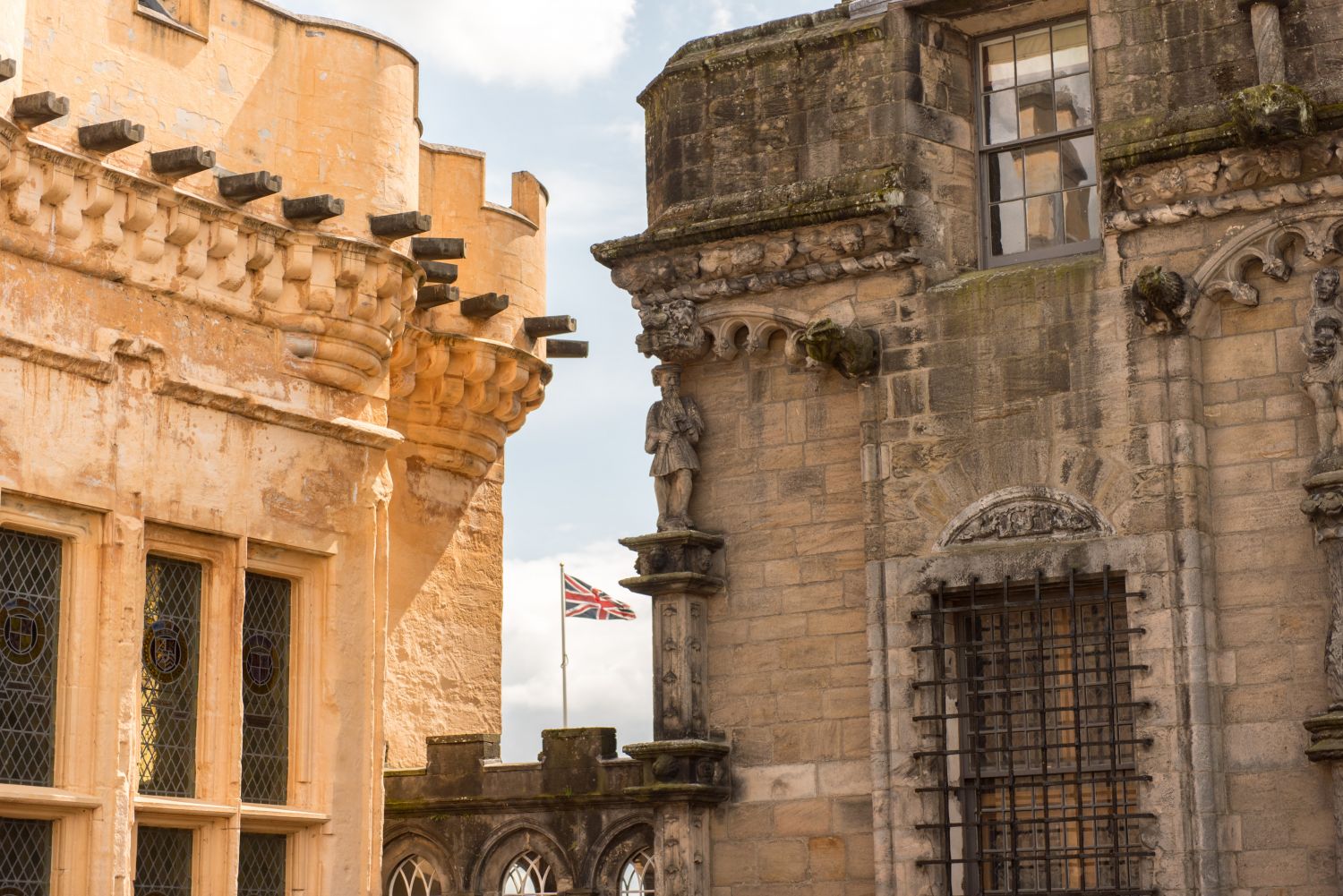 If any of you have met the friendly owners of Best Scottish Tours, you may have picked up on their love for Eilean Donan Castle so this seems like the perfect place to start our tour. Eilean Donan is the castle of Clan MacRae, first built in the 13th century. However, historians think the island may have been used as the site for a chapel as early at the 6th century. Clan wars and the Jacobite uprising have meant that the castle has been partially destroyed and re-built a number of times. Fortunately, the MacRae family have kept the castle in good repair for visitors, they even rent out the castle for weddings, business events and fashion shoots! It is the location of Eilean Donan Castle which makes it so spectacular. Kintail is just across the sea from the Isle of Skye and the castle is situated on a small island where Loch Long, Loch Alsh and Loch Duich meet. The old fortress, only accessible by an arched stone bridge, watches over its three precious lochs. It is so atmospheric that as you cross the bridge, you will feel like you have gone back in time to when the MacRae clan and their army would use the castle as vantage point to protect their land. It really is the King of Kintail. 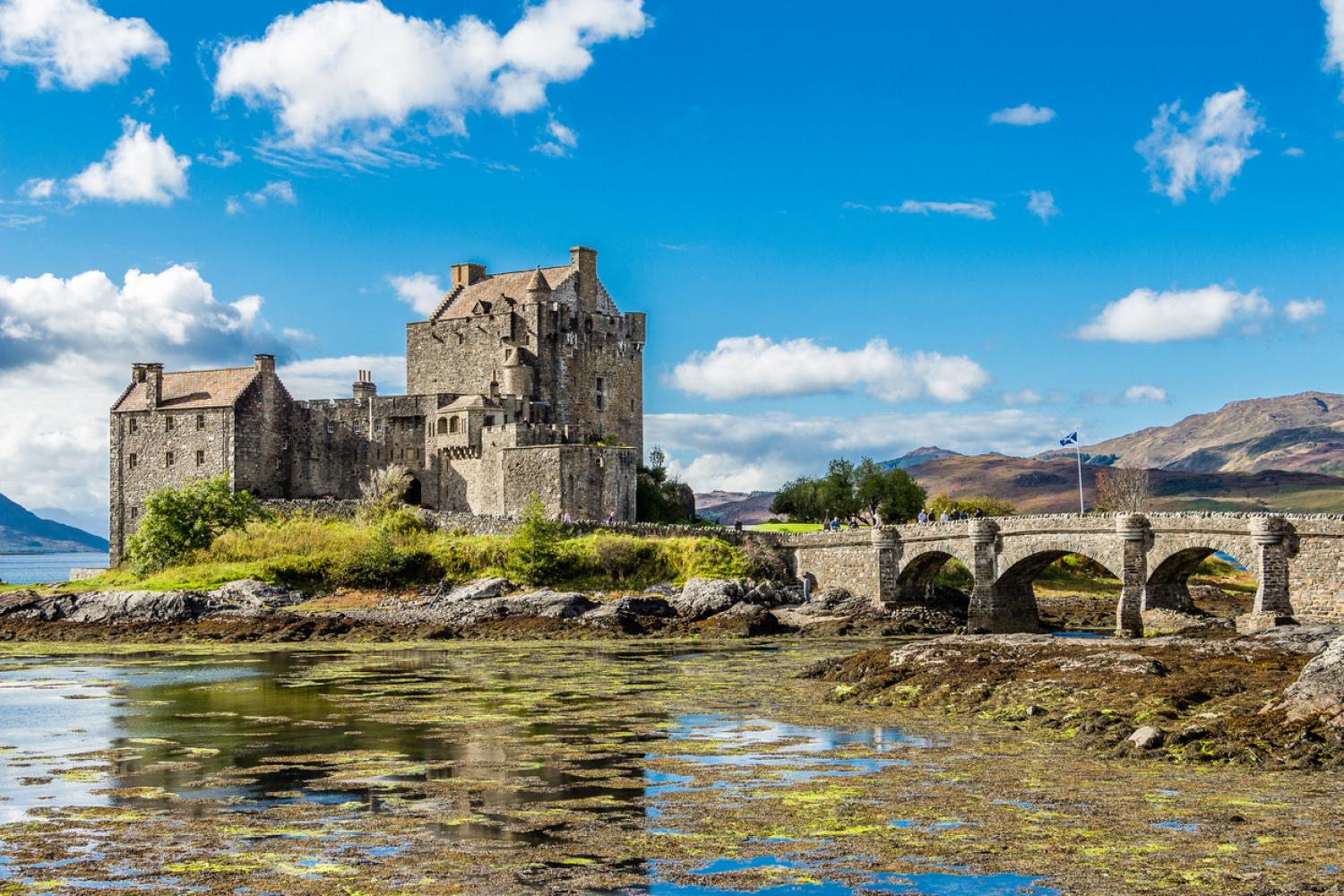 Just across the water on the Isle of Skye is Dunvegan Castle. This was also first build in the 13th century and some of the building work from this period still remains today. One of the most impressive things about Dunvegan Castle is the 5 acres of beautiful gardens, they even have their own waterfalls. A tour of the colourful and lush flower beds and streams is a must during your trip to the Isle of Skye. You can also take a 25-minute boat ride to visit the Loch Dunvegan seal colony. Dunvegan Castle is the perfect day out for families.

Next, we shall visit two castles in the far north of the Scottish Highlands. Firstly, Dunrobin Castle, which has been inhabited by Clan Sutherland for over 700 years - historically one of Scotland’s most powerful families. Dunrobin is a more modern castle than some of the others on our tour. It still has the coned turrets and small windows you would associate with a castle, but today it looks somewhere between a fairytale drawing and a grand country home. It is a castle fit for modern day royals! Do you have any keen bird watchers in your family? If so, make sure you include Dunrobin Castle on your Scottish itinerary. During the summer months you can see golden eagles, owls and falcons performing acrobatics at the daily falconry shows. The castle is open to visitors between the 1st of April and 31st of October but you can visit the grounds in the winter months. 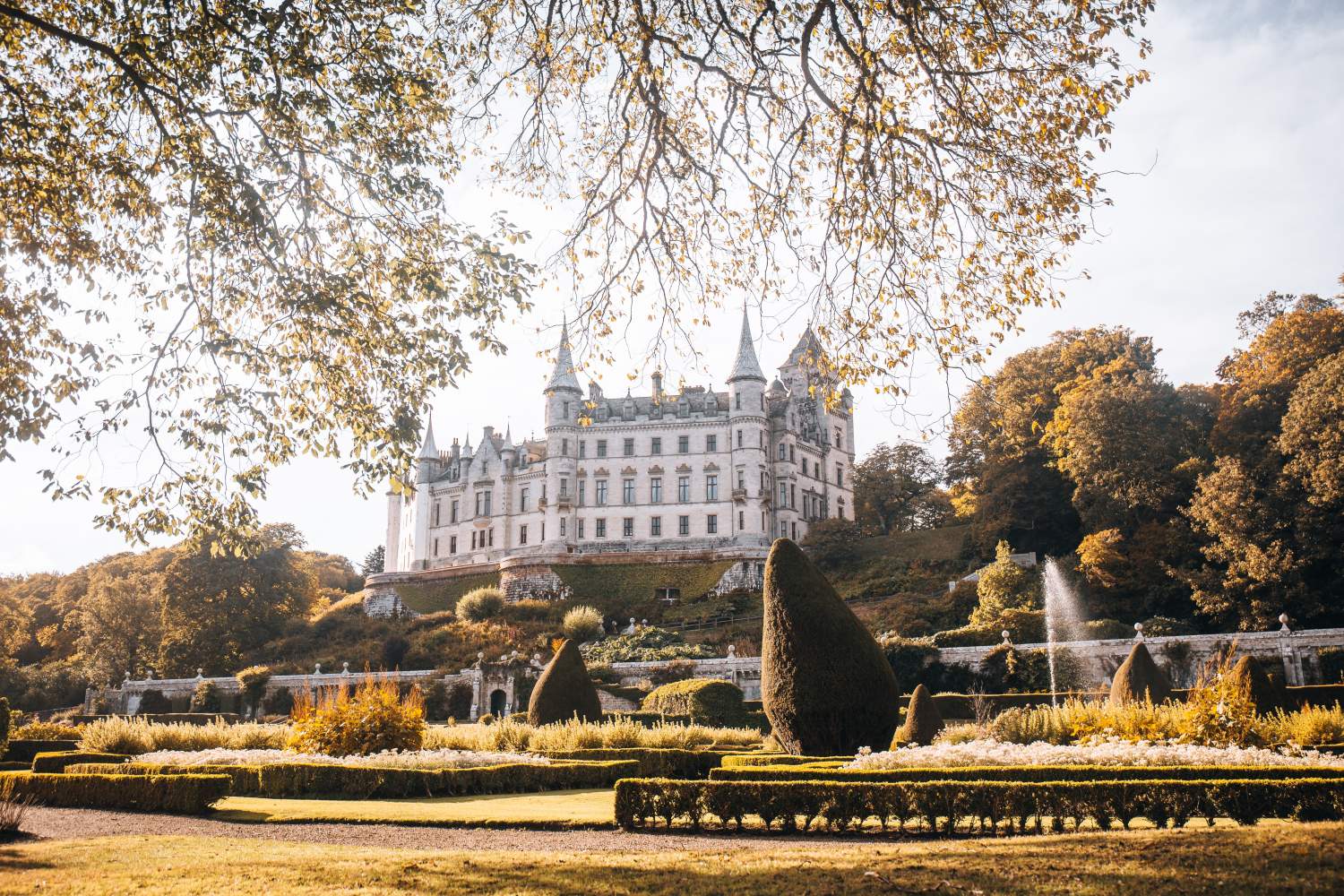 Scotland’s most northerly mainland castle, with views across to Orkney, is The Castle of Mey in Caithness. Its story begins in a bloody family feud during the 16th century. The 4th Earl of Caithness had three sons, John the oldest, William and George the youngest. Today we often say the middle child is overlooked, but not in this family. The Earl actually built The Castle of Mey for his son William. John was instead imprisoned by The Earl, however he concocted a plan to escape from his father’s chains. Favourite child William told his father about John’s plans but unfortunately for William, this didn’t stop him. He managed to escape and murder his younger brother William. The family bloodshed did not end there, John was re-captured and executed by his father. This of course left the castle in the hands of the Earl’s youngest, George Sinclair. Quite a history! The family lineage stopped with George the 15th Earl Caithness who produced no heir. He left the castle to friends, who later sold it to Her Majesty Queen Elizabeth, The Queen Mother, in 1952. The castle was in a state of disrepair at that time, however the Queen Mother restored the castle to the northern jewel it is today. In recent years, His Royal Highness Prince Charles has continued his grandmother’s legacy and visits the castle every year in his role as President of The Castle of Mey Trust. 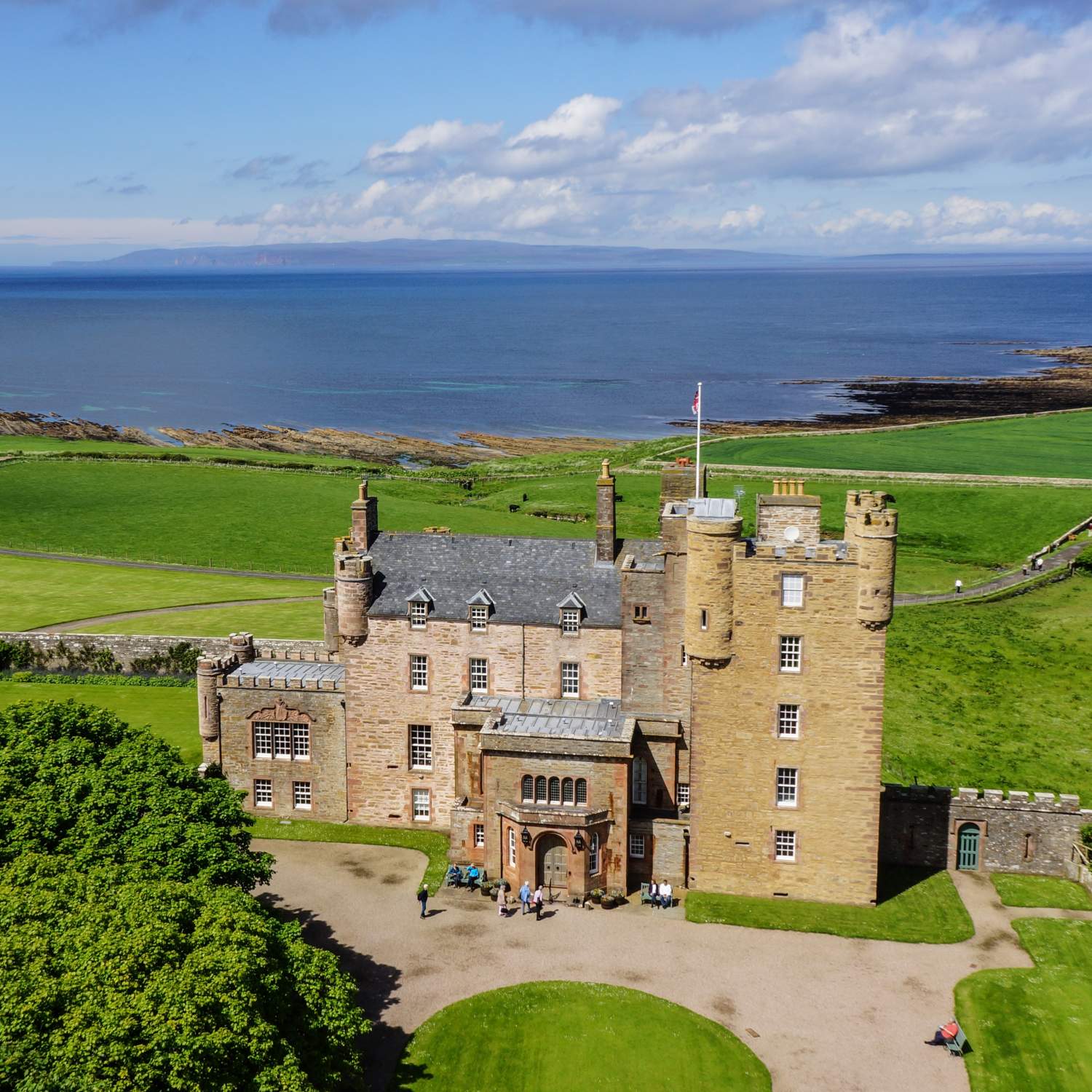 Castle of Mey - provided by the castle

Now to my favourites! The castles of Aberdeenshire - Slains and Dunnottar. Both of these castles sit on our windy east coast and while a lot of the stone work still stands, these are ruins as opposed to modern day homes of our ancient clans’ ancestors. I mentioned Slains Castle in my last blog West vs East - “Set right on the edge of cliff above a choppy sea with little else around for miles, it is not hard to see why it inspired Bram Stoker to write the tales of Count Dracula.” It is fairly barren, Dunnottar on the other hand has kept more of its structure over the years. You have likely seen many photos of the iconic Dunnottar Castle sitting on a large bulk of red rock which has formed on the coastline of the bitter North Sea. I don’t envy those who used to live there, the conditions are pretty harsh even for us hardy Scots! Similar to Eilean Donan, the first building on the site was a place of worship - this time built in the 4th century. In the 9th century, King Donald II of Scotland was killed there when Vikings attacked and destroyed the building. At one point the site was also captured by William Wallace so it has great importance in Scottish history. The hill above the castle gives you an amazing view of the castle. With the narrow path winding down the shore and then up again to the ruins, it seems as if the ancient rock it sits on was formed with the sole purpose of displaying this mighty medieval fortress.

Heading across to the west coast, I recently visited the lesser known Castle Tioram next to Loch Moidart. It might not feature in many blogs about Scotland, but due to its beautiful beach setting, I felt that it deserved to be mentioned here. It sits on a rocky islet above a large, quiet sandy beach in a very remote area of Scotland. Unlike the other castles on our tour, it has a very peaceful feel, surrounded by beautiful views of the loch, the forest and the River Shiel. It is affectionally nicknamed ‘Amy’s Castle’ by locals as they say it was built by Amy MacRuari in the 14th century, the first wife of John of Isla. It is definitely one of the more romantic spots on our tour. 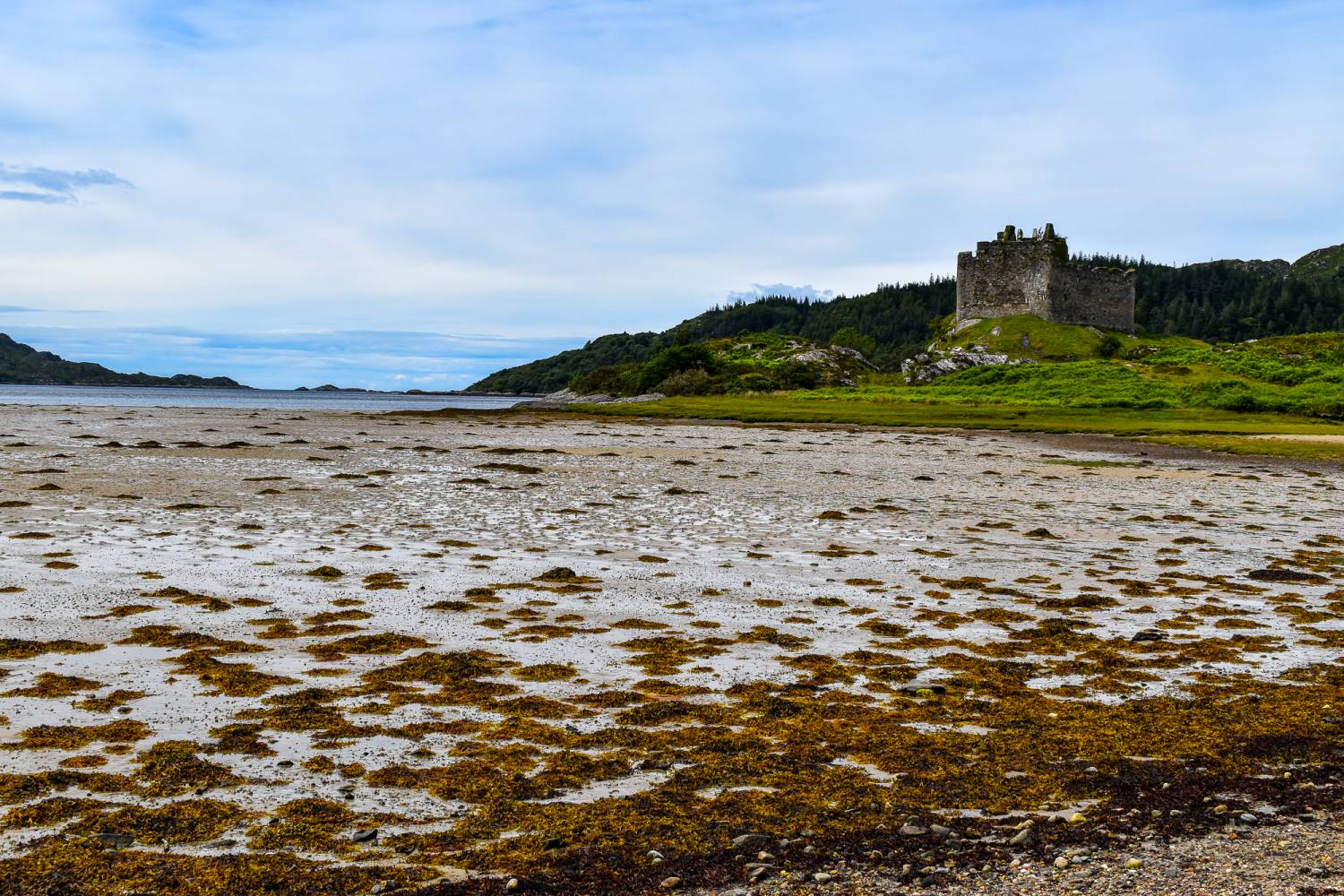 Castles in the Heart of the City

Our castles aren’t all in the remote Highlands, some are right in the middle of Scottish cities. Both Edinburgh and Stirling Castle are favourites of visitors to Scotland, being full of exhibits and information about life in the castle and the towns they ruled over. It is a great opportunity to find out more about the day to day lives of our Scottish ancestors. If you get a chance, head to Princes Street after dark to see Edinburgh Castle floating above the city, lit up in a colourful light display.

The final castle I must mention is Urquhart Castle on the banks of Loch Ness which has a story stretching back over 1,000 years. It is said that St Columba visited the site of Urquhart Castle, then called ‘Airdchartdan’, sometime between 560-580 AD. There lived Emchath, an old Pictish nobleman who wished to be baptised by St Columba before he passed away. Of course, Emchath wasn’t the only person St Columba came across on his journey to Loch Ness… he also met the giant monster of the loch, our Nessie. In later years Urquhart Castle was fought over in The Wars of Scottish Independence. It was at one point a royal residence and was given to Clan Grant in the 16th century. However, their ownership was challenged on more than one occasion by power-hungry Clan MacDonald.

Visiting Castles in 2022/23 is going to be a little different from normal. Tickets now need to be booked in advance and you will be given a time slot for your visit. Some Scottish attractions aren’t accepting large group bookings but as we are a genuine small group tour provider, with no vehicle holding more than 8 people, we are still able to visit Scotland’s castles. Our team will organise all of this for you, so there is no need to worry about booking your tickets. If you would prefer a private tour for two people or more, we are happy to accommodate this. 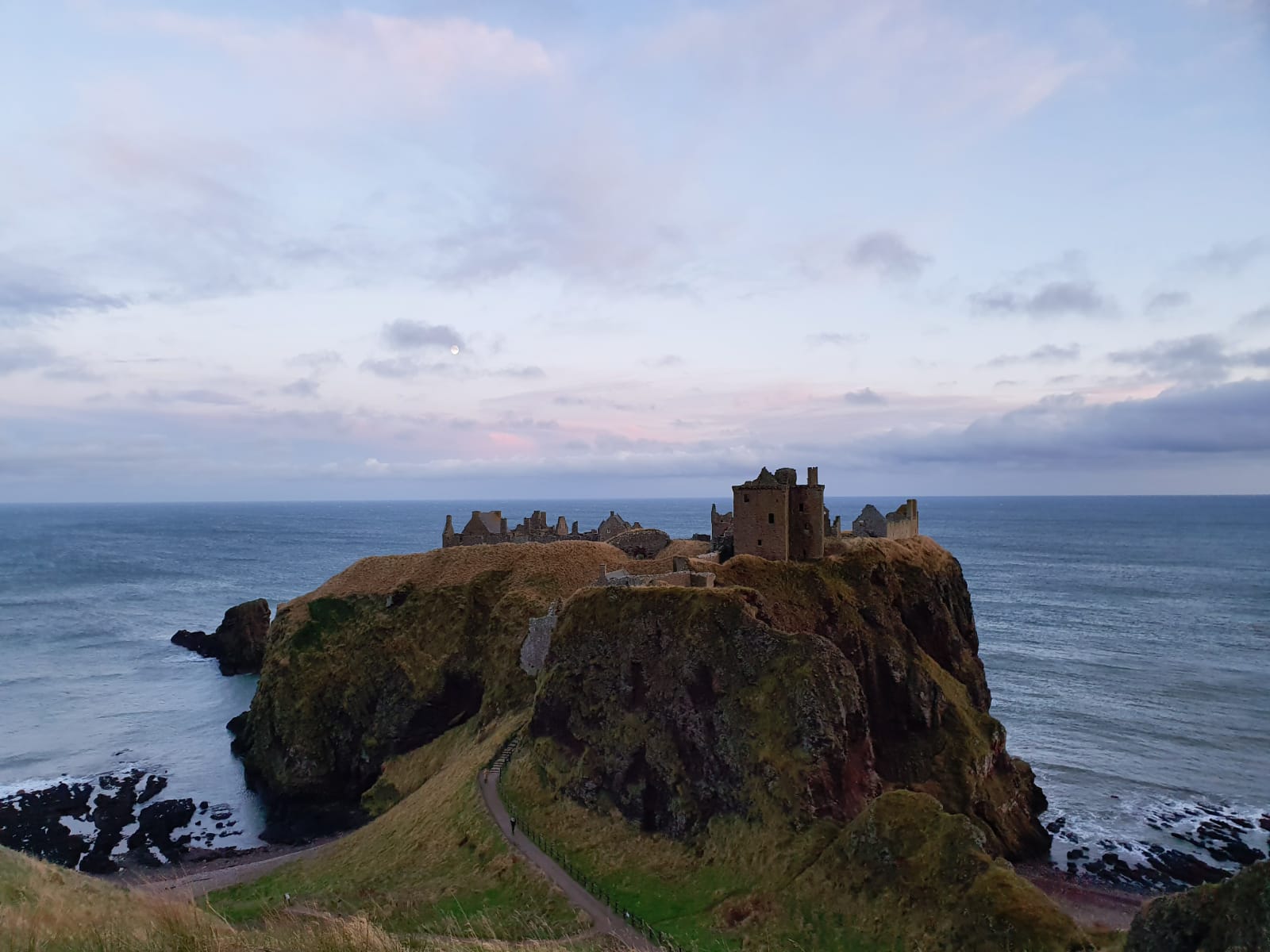