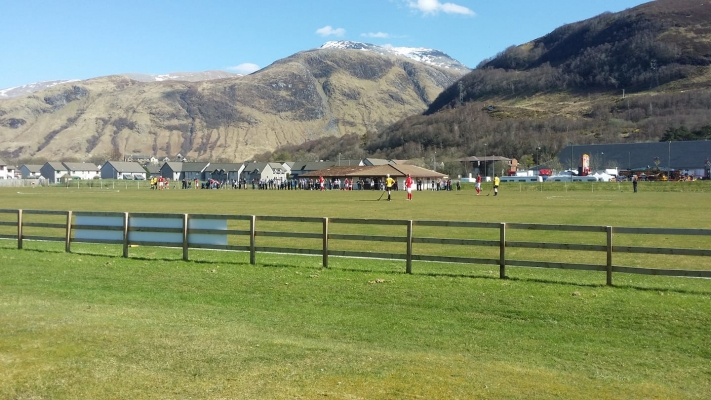 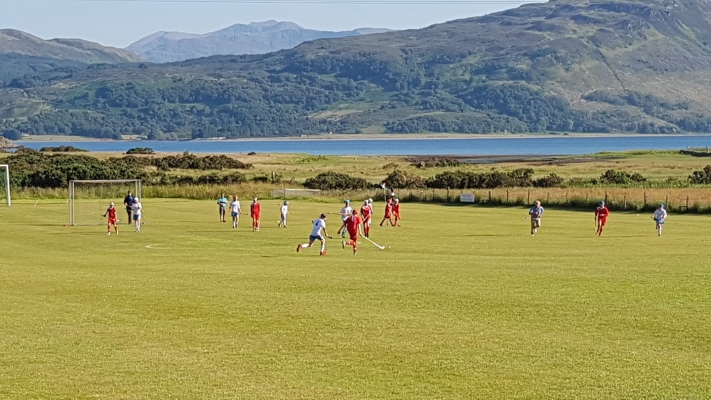 Do you know what Scotland’s national sport is? No it’s not soccer... its shinty of course! Shinty is rarely played outside Scotland so it is not widely known about. It is often described as a mix between hockey and lacrosse. Essentially, we run around a big grass pitch with long wooden sticks trying to hit a leather ball into the other team’s goals. It is ‘semi-contact’ and the sticks and balls are in the air a lot so we wear helmets for protection (most of us do anyway!). It is at times a bit of a rough sport; hundreds of years ago it was used as part of the training for Scottish warriors! However, the places in which we play are often absolutely beautiful. You can take a look at the sport in this video.

My home pitch is in Glasgow and I can’t say that applies to us, however being a player means that I have spent many a Sunday travelling all over Scotland for away matches. Scotland’s shinty pitches can be found next to gorgeous beaches, below towering mountains and some even have castle views! Fancy a Scottish tour with a difference? Read on for my top 10 Scottish shinty pitches…

Oban is a lovely little town on the west coast, a sailing port for a number of the western isles. Right at the end of a winding road through Oban is Ganavan Sands, a peaceful golden beach. The  shinty pitch sits above the bay affording players a wonderful sea view over to the islands of Mull and Lismore. This is probably my favourite pitch of all, and at times I’ve found the view has distracted me from the game in hand! It’s easy to lose yourself in a daydream gazing out across Ganavan Bay. 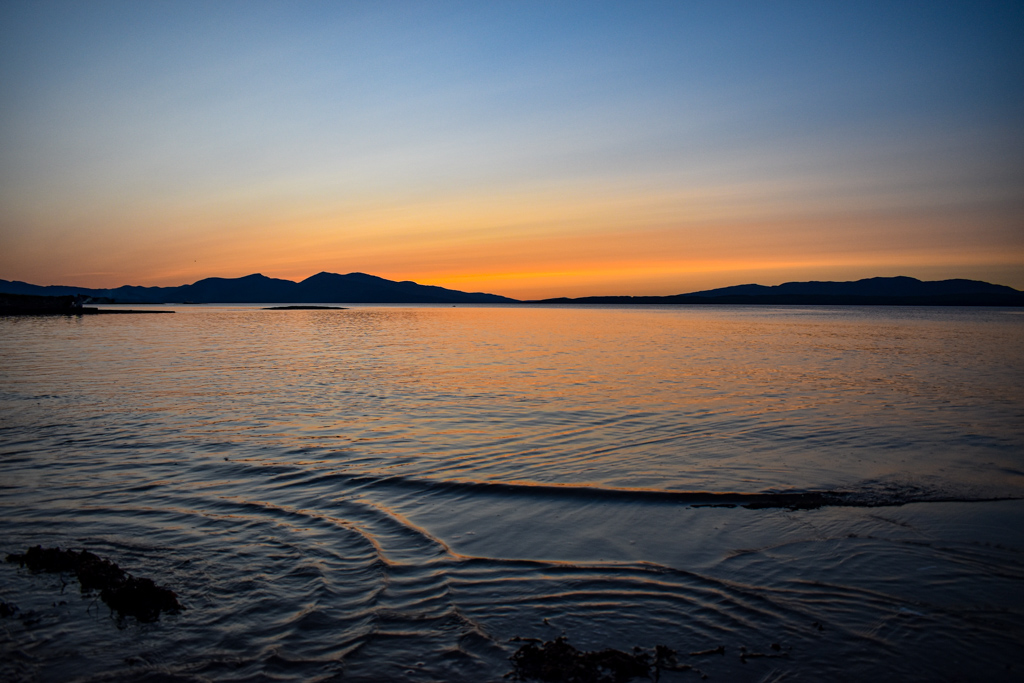 Another beachside pitch is Silver Sands, home of Aberdour shinty club, this time over on the east coast in Fife. The pitch is surrounded by trees and as the name suggests, the sands of this beach have a more silver tone. Aberdour is along the Firth of Forth estuary - a sheltered area of coastline where the River Forth flows out into the North Sea. From the pitch you get a great view over to the North of Edinburgh which lies on the other side of the Firth. 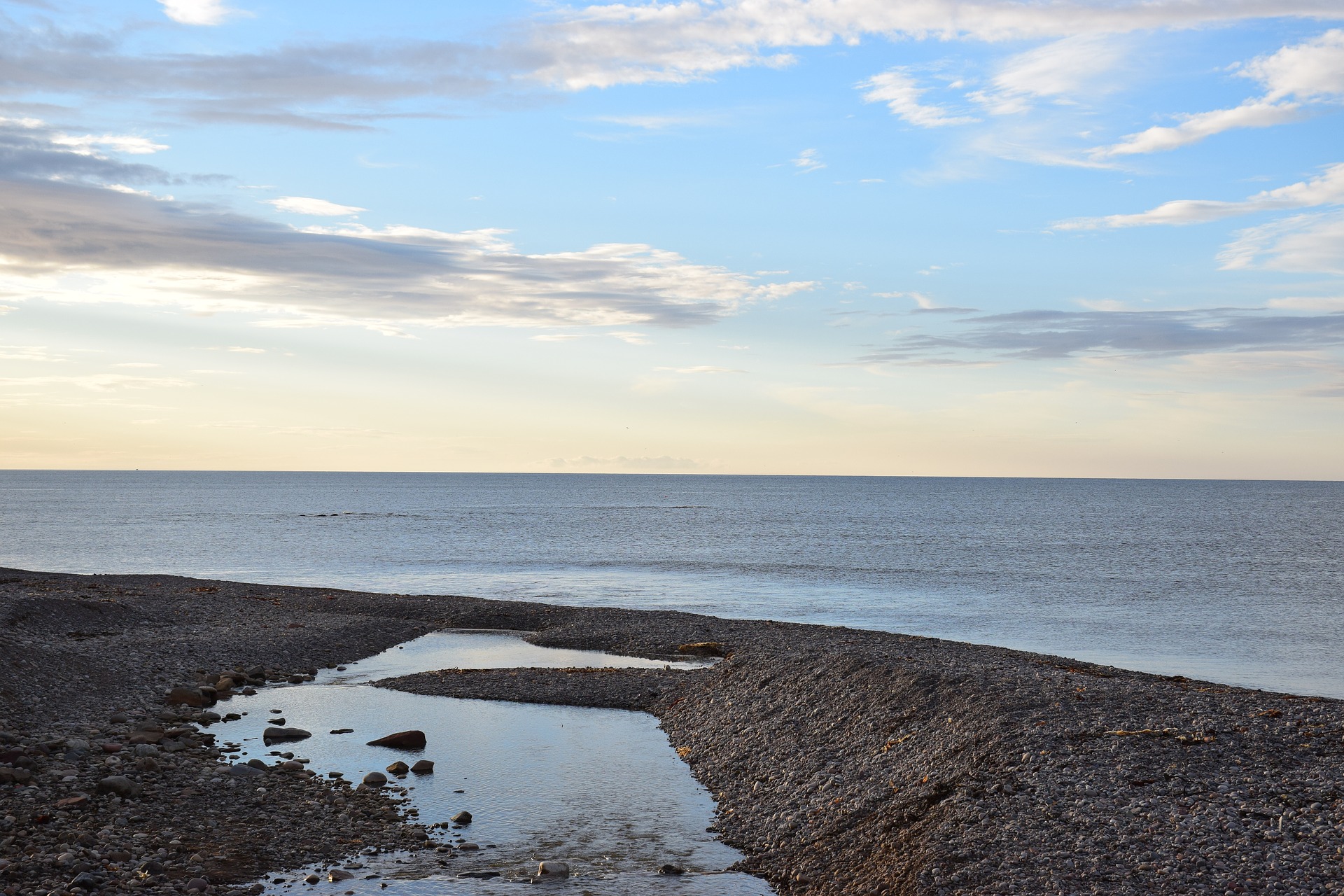 I promised you pitches in the grounds of castles and Inveraray does not disappoint! There is even an ancient standing stone right next to the pitch… in fact, it’s a little too close. I am sure that over-enthusiastic tackles must have resulted in players crashing in the stone a few times! The other direction is a sea view - so you really do get an amazing 3600 panorama while playing at Inveraray. We love this photo of the side of the pitch captured by Andy Sweet of Stravaiging around Scotland. 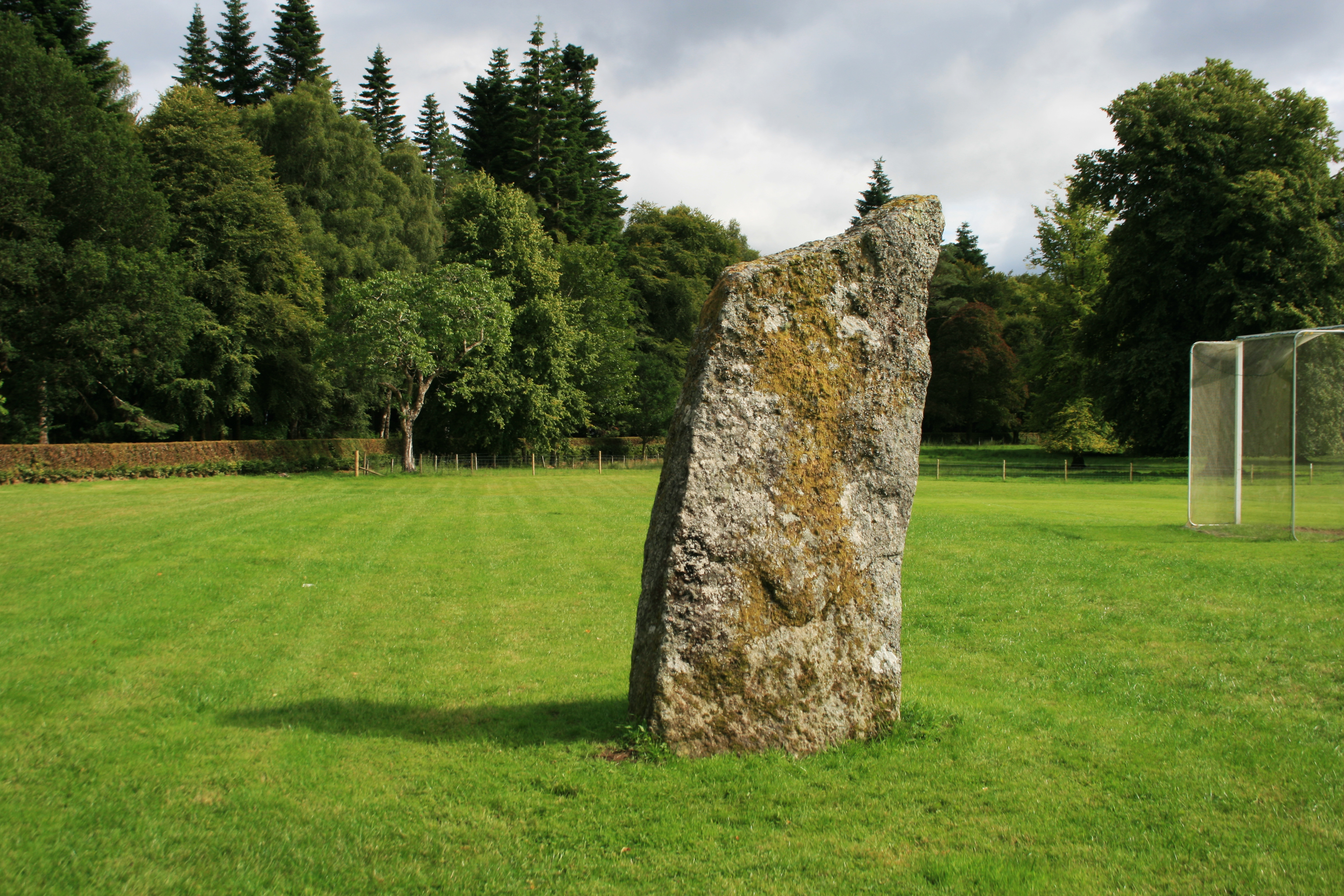 The grounds of Castle Leod in Strathpeffer are also the home of a shinty team - Caberfeidh. This 15th century castle, the seat of Clan Mackenzie for over 500 years, is nestled in a tall forest. It has kept more of its original character compared with the more modern Inveraray. Many of our tours visit this part of the Scotland - the castle is close to one of our accommodation partners, Coul House Hotel and a lot of our tours which pass through Inverness spend a night near Strathpeffer. 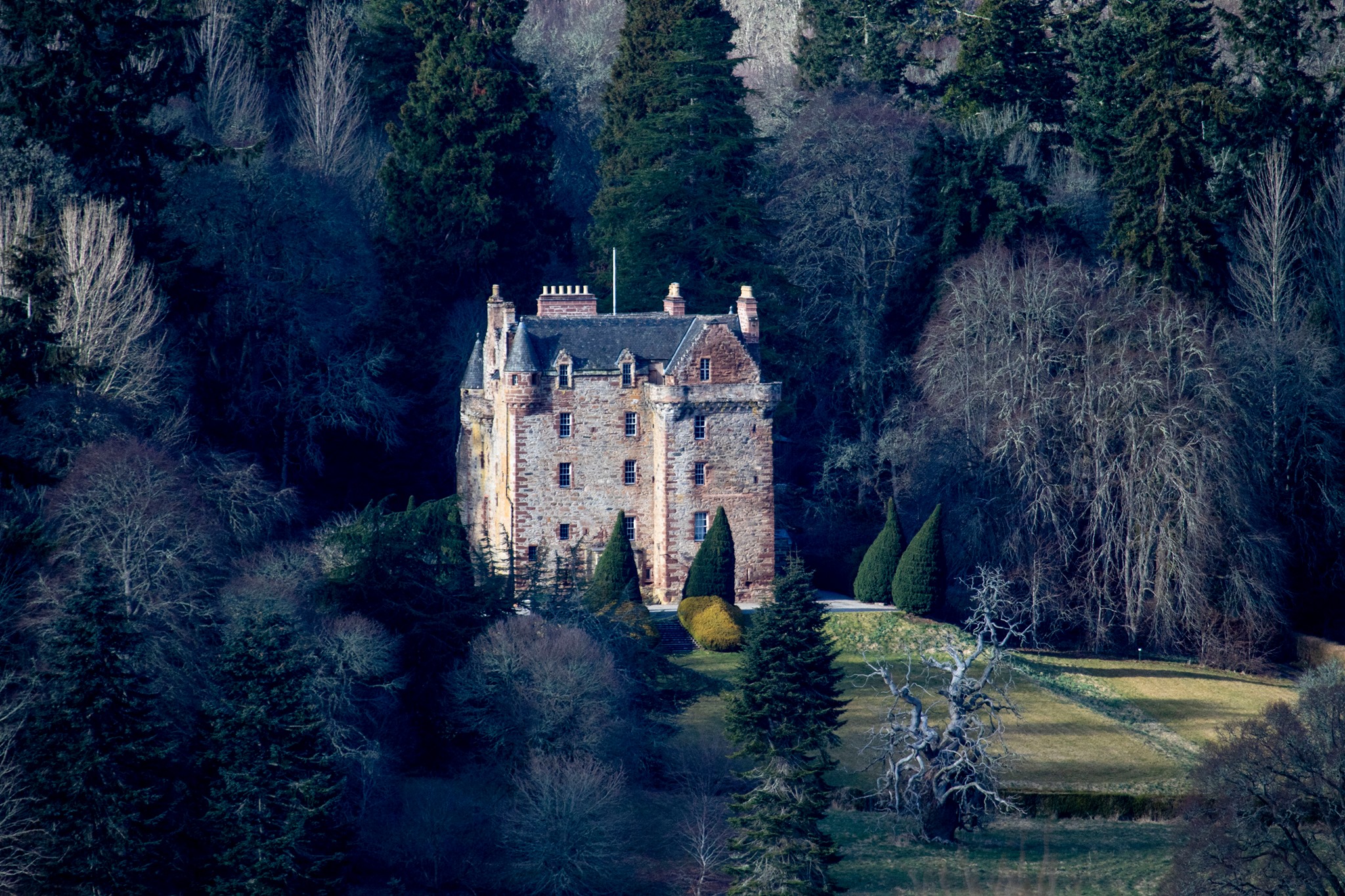 Kyles Athletic pitch in Tighnabruaich is a funny old pitch… mostly because it is on a fairly extreme slope! Winning the coin toss at the start of the game is more important here than anywhere else… no team wants to have to run up hill in the second half when they are already exhausted. Once you see the view, you can understand why the locals decided to build the pitch here despite the less than ideal ground. The side of the pitch drops off onto a glistening loch with the Isle of Bute just across the water. Bute has a very pretty pitch itself. 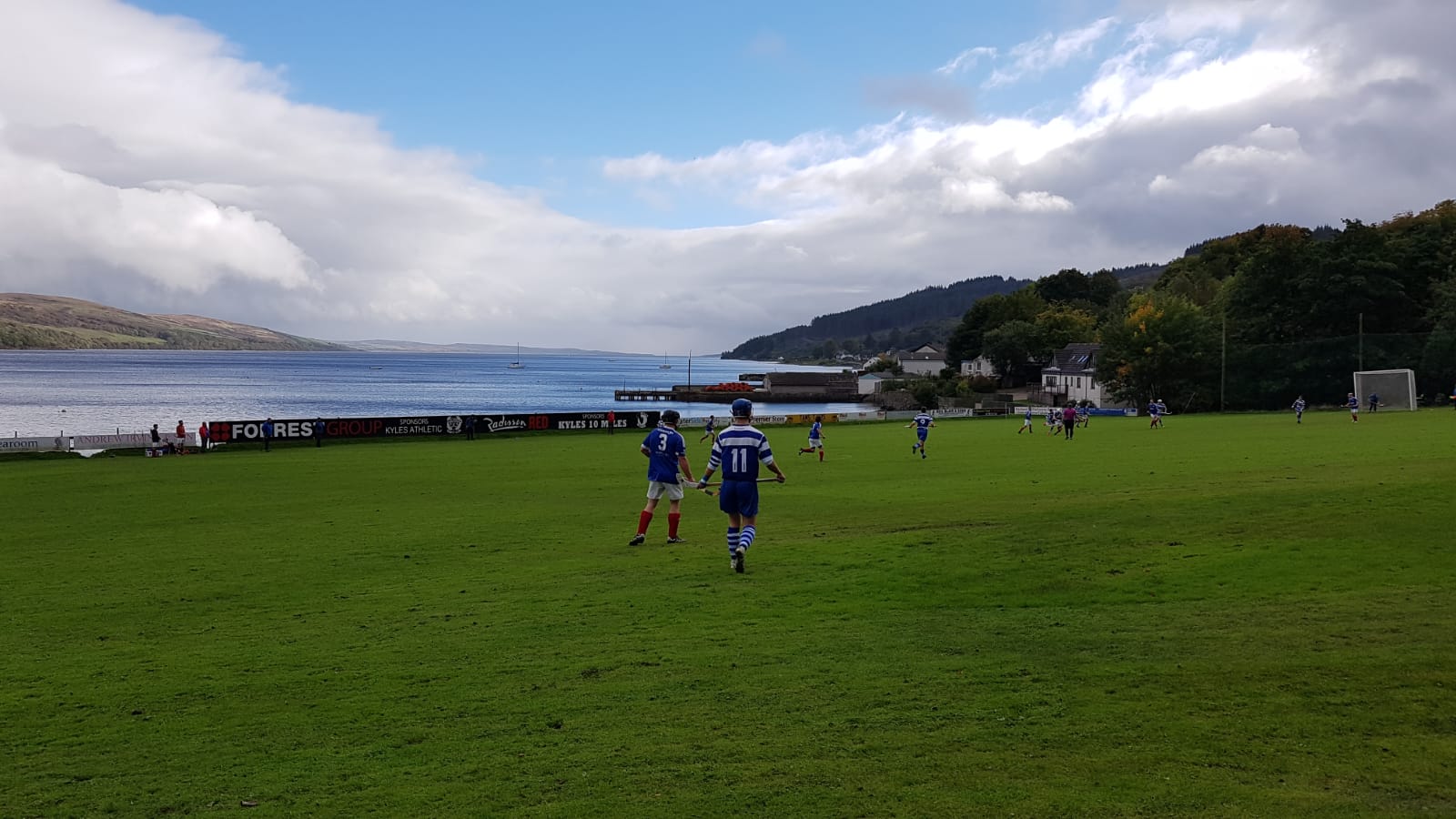 You have of course all heard of our highest mountain Ben Nevis. An Aird is the closest pitch to this towering giant and offers a fantastic view of its snow-covered eastern flank. An Aird is where many of the most important shinty games are played and often hosts the Camanachd Cup Final - the biggest game of the year! 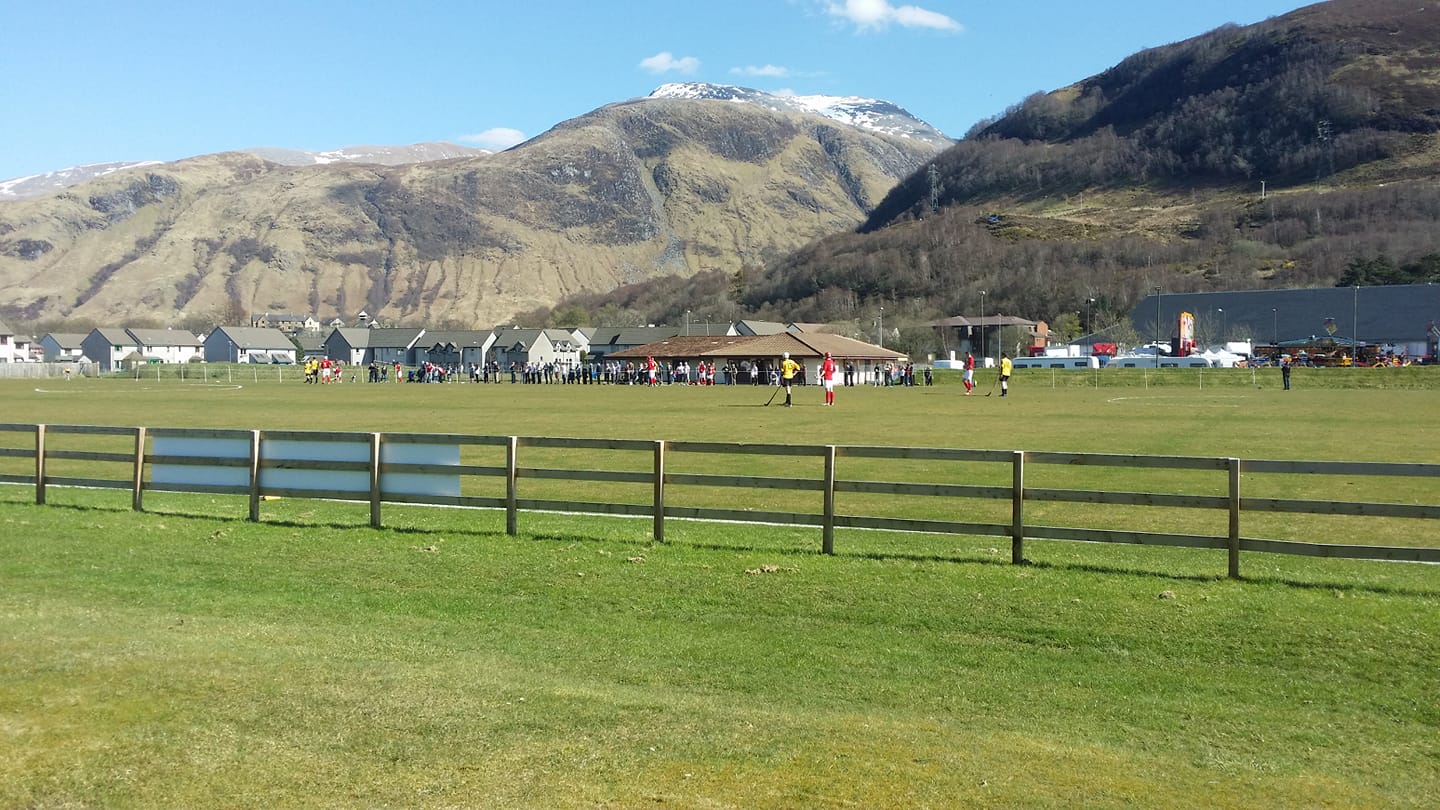 Just along the road in Kilmallie is Canal Parks; the western highlands of Scotland has the highest concentration of shinty teams and a lot of the best teams are in this region due to the sport being much more popular there compared with the east and south of Scotland. The pitch sits on the loch-side where Loch Eil flows into Loch Linnhe and it has similarly great views of the Nevis Range. 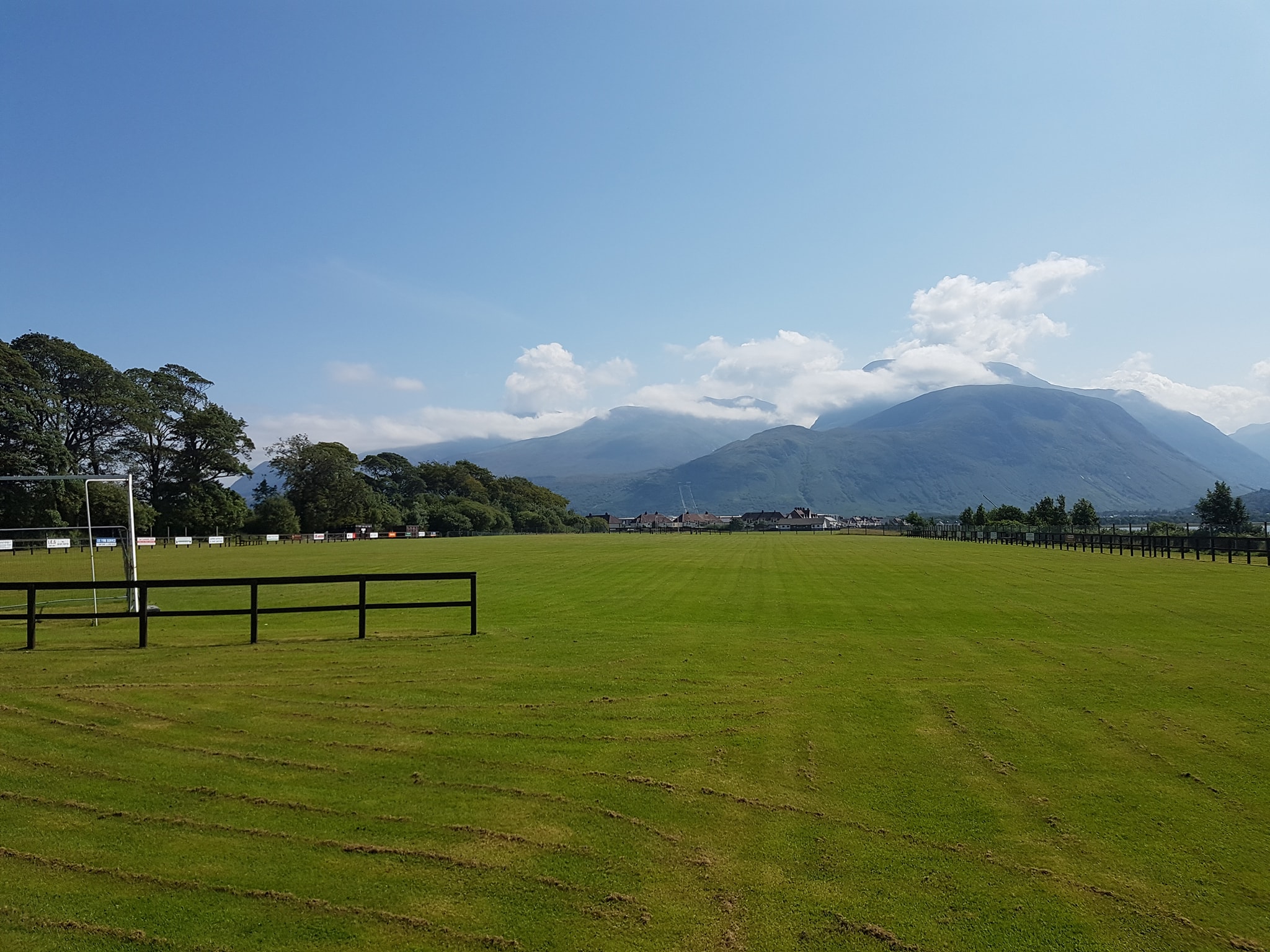 The Skye shinty teams, like their mainland neighbours, have formidable players. You might think I would relish the opportunity to play a game on glorious Skye… however most years it is a flying visit with little time for sightseeing. It is also often our biggest defeat of the season; last time Skye thrashed us 10-1. Not our finest hour! Thankfully, the setting of Skye’s pitch is as stunning as its players are talented (I say that with no hint of bitterness of course). It is a great viewpoint for several of Skye’s famous mountains and we do always find time to stop at the Sligachan Bridge for some photos. 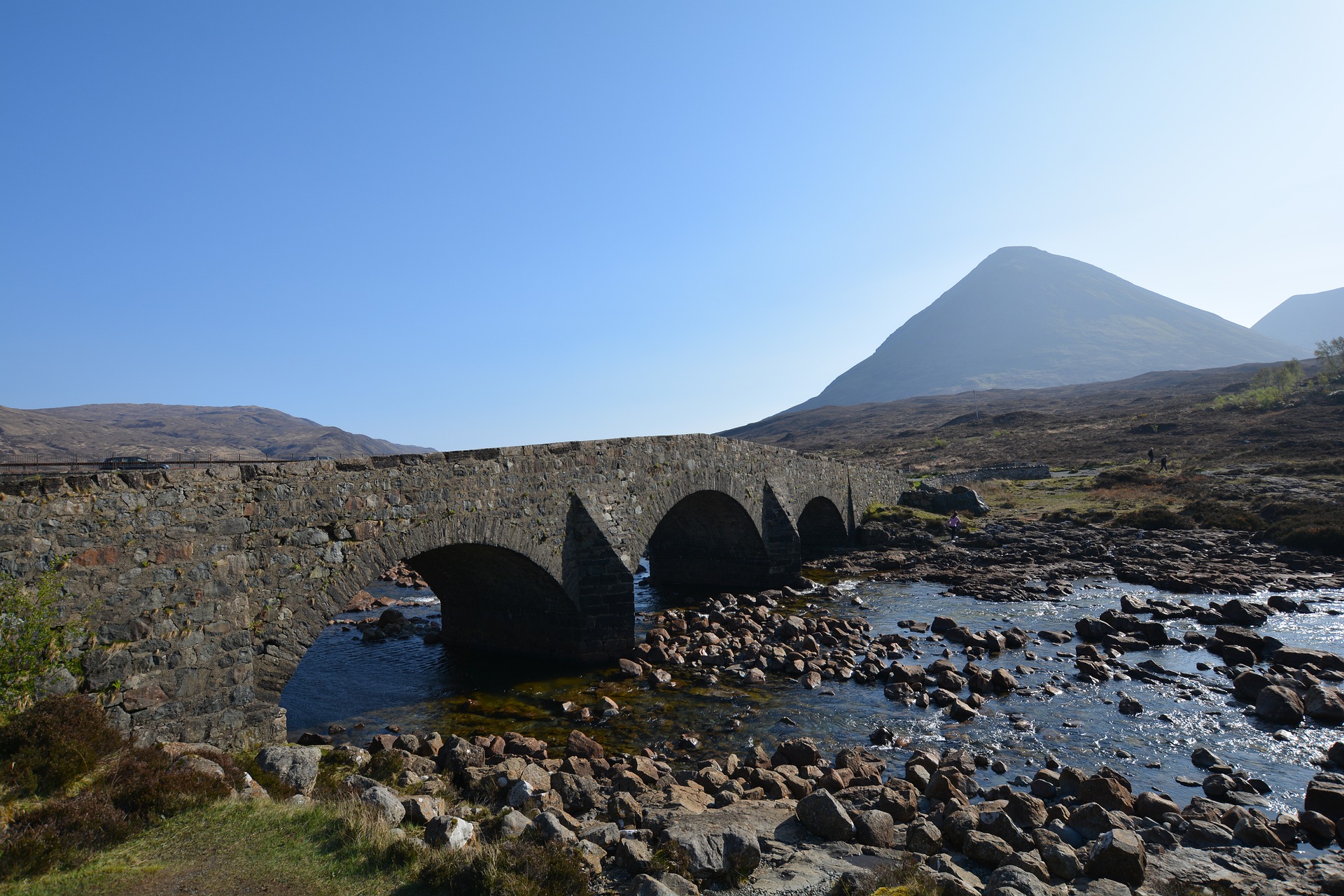 Back on the mainland, another pitch nestled in the mountains is Newtonmore - situated on the northern outskirts of The Cairngorms National Park and in close reach of the Monadhliath mountain range. This pitch is further east than the other big teams… but Newtonmore are certainly one of best! 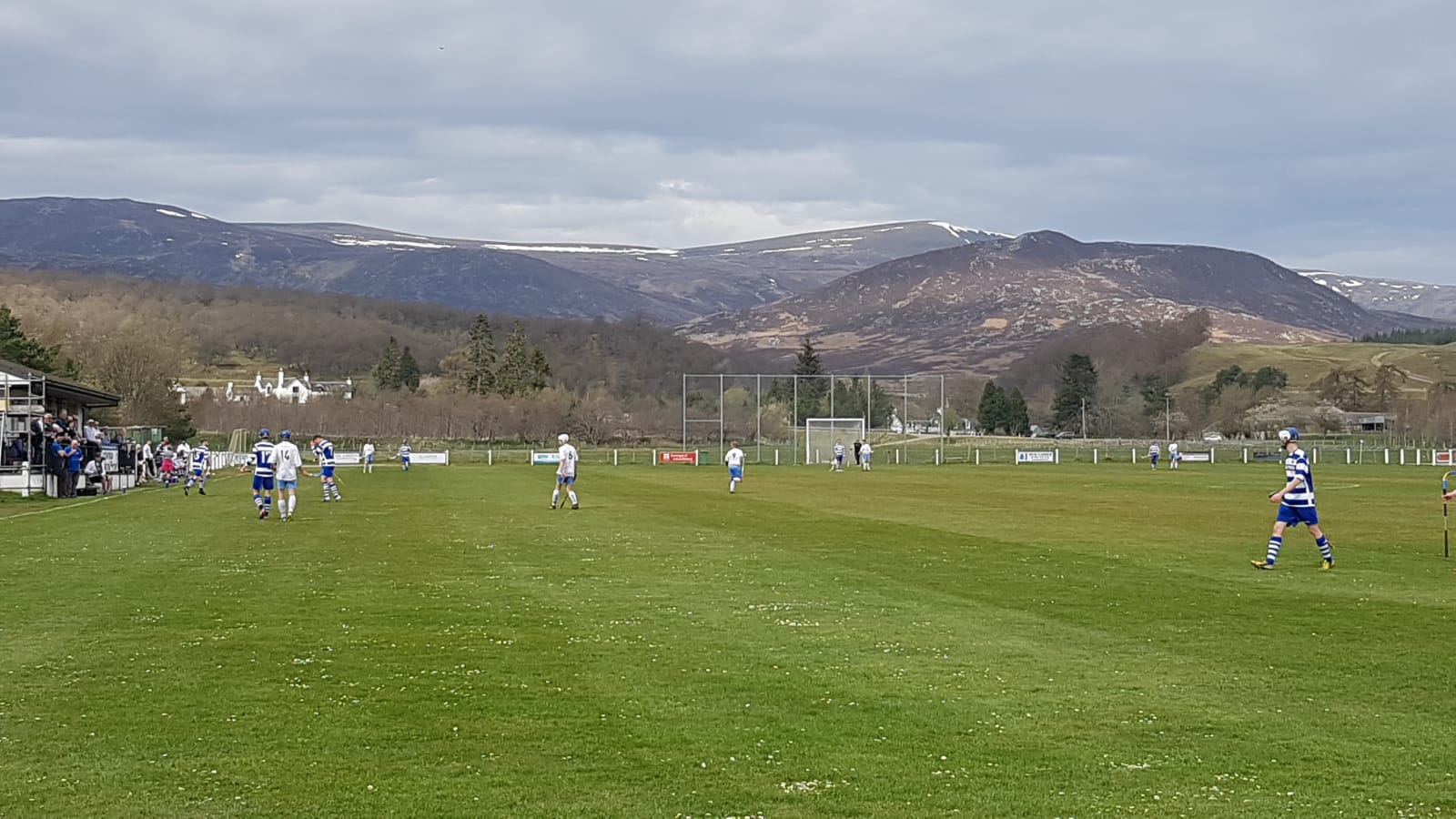 Finally, I must include Taynuilt shinty pitch. It lives at the bottom of Loch Etive; the loch leading to Glencoe. Ben Cruachan, sometimes known as Taynuilt Peak, is a distinctive ‘pointy’ mountain which rises sharply above the pitch. 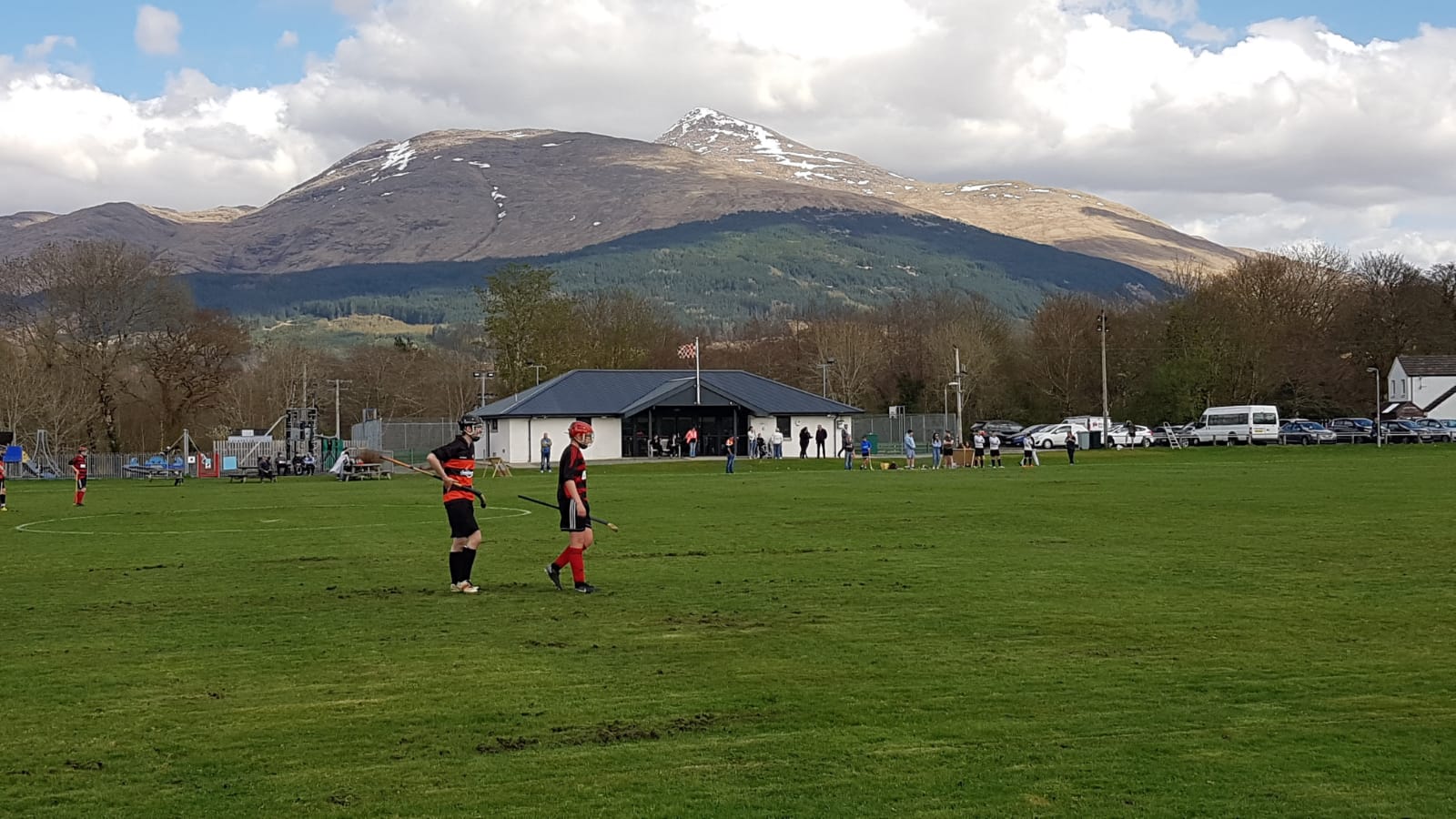 I hope you enjoyed your tour with a difference. I love sharing stories of our national sport with others. There are so many more beautiful shinty pitches across Scotland, I hope that you manage to spot one on your tour of Scotland.

Playing sport in any country is a great way to see parts of your homeland you may never have thought to visit. However, due to the prominence of shinty in rural areas as opposed to cities, there is something extra special about playing shinty. For good measure, I’ve included a photo of my home pitch in Glasgow below. It is pretty unlikely you’ll be visiting our home grounds as they aren’t in the most scenic part of the city… unless perhaps you get very lost!

We miss you, Scotland misses you. We can’t wait to welcome you back. 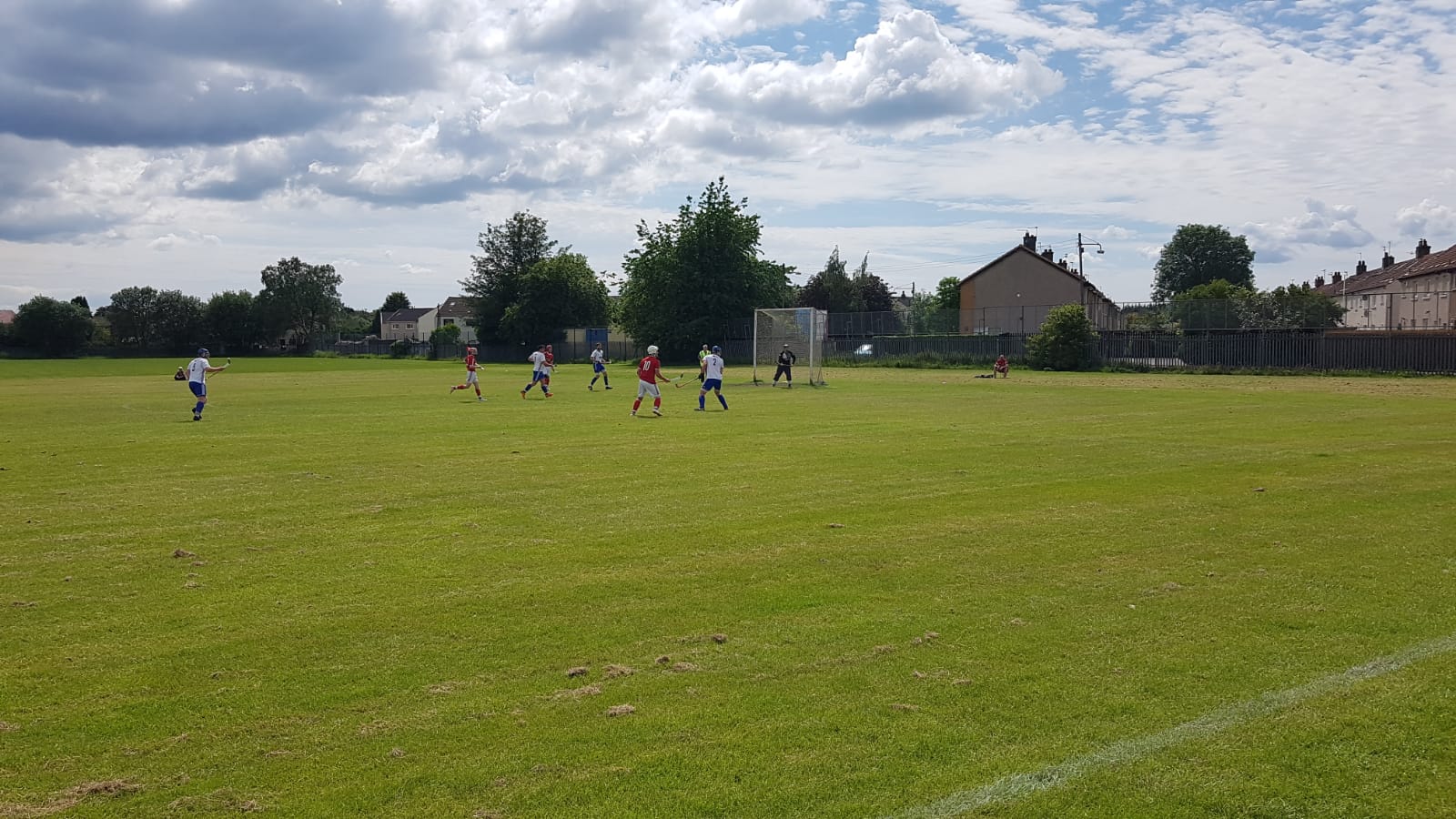 Discover a unique travel experience yourself and choose an unforgettable vacation in Scotland in 2021 with Best Scottish Tours.