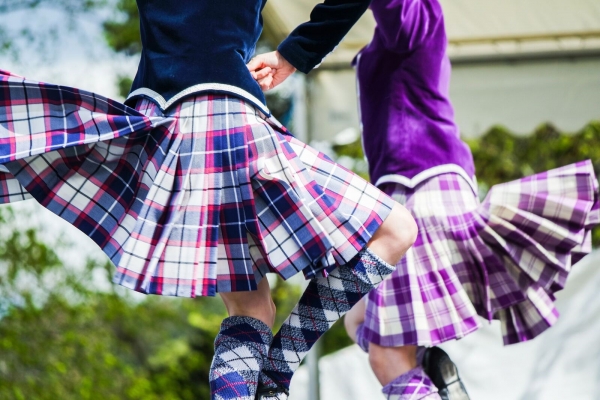 Every summer throughout Scotland local communities gather for a very special day – a day of traditional sports and events unique to Scotland.

The Scottish Highland Games are believed to have taken place for hundreds of years prior to recorded history. The earliest historical record of the games occurred during the reign of King Malcolm III who was on the throne between 1031 and 1093 AD. King Malcolm was in search of the fastest man in Scotland to become his royal messenger. His test, a race to the top of Craig Choinnich, described by Walk Highlands as “a beautiful little hill just east of Braemar, clothed in pinewoods. Its ascent makes a short but very steep walk”. It sounds lovely until that last part! 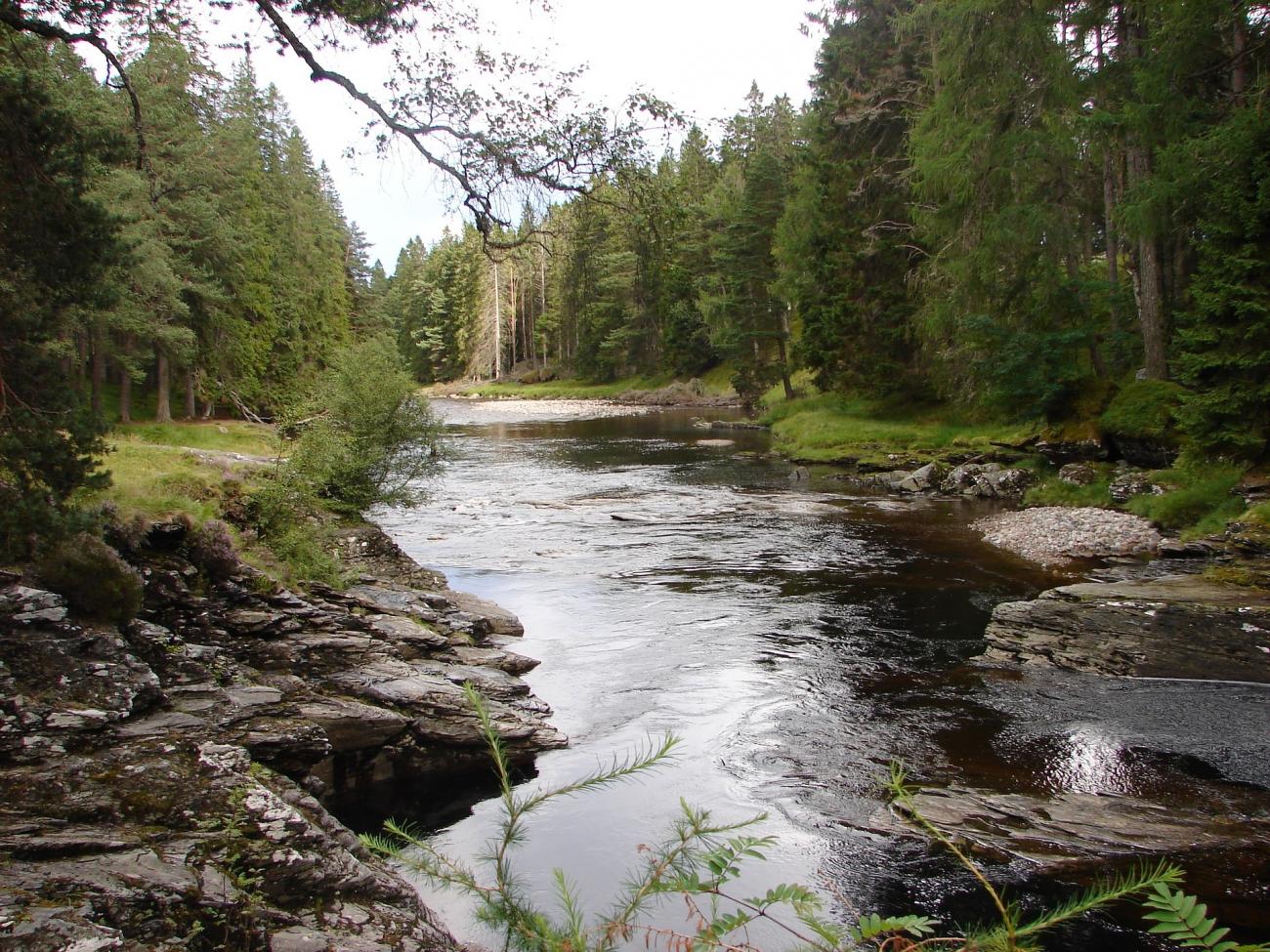 The Highland games were not  just a test of athletic prowess; family clans would send their best musicians and dancers alongside their strongest warriors, to compete in the hope of bringing honour to their clan. A much more civilised way to do things compared with stealing each other’s castles.

This is a wonderful Scottish tradition which still thrives today. Throughout the summer months you will find over 100 events taking place all over the Highlands and now in the Lowlands too. Children’s clubs and schools hold mini Highland games. You can even include them as part of Bachelor and Bachelorette parties or ‘Stag’ and ‘Hen Do’s’ as we call them here in Scotland. Nothing like celebrating the end of your single days by launching a hammer across a field…

There are a large range of entertaining competitions to enjoy during your visit to a Highland Games. Contestants train all year for these events and travel around Scotland throughout the summer competing at as many games as they can. The young dance troupes always seem particularly earnest! I guess some things are the same wherever you are in the world. 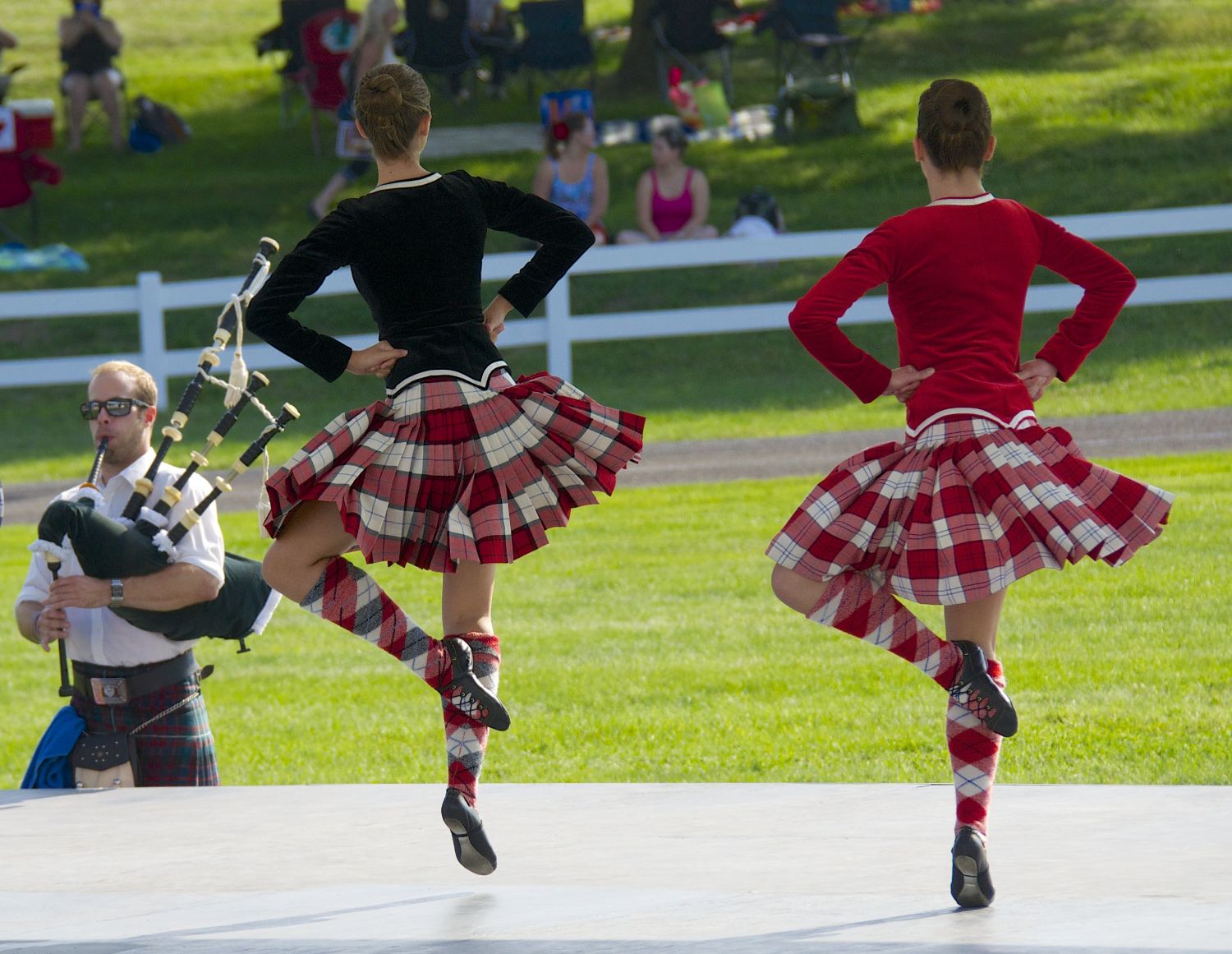 The games include some Olympic sports such as sprinting and shot put. Other sports are rarely seen outside Scotland. Take, for instance, tossing the caber. Many think the idea is to throw a huge wooden pole as far as you can. However, it is actually about how precisely you throw the caber. The competitor takes a short run  then throws the caber so that it flips with the aim of landing the ‘handle’ end at a 180 degree angle from the where it was thrown. It is not all brute strength (although it helps); some skill is definitely required.

Not every event is taken so seriously - although if you are 5 years old and your puppy comes last in ‘the dog with the waggiest tail’ competition you may need an ice cream to cheer you up. There are competitions for baking, art work and growing the largest onions in the county. Something to suit everyone’s talents. What really makes a day out to the games so special is that most of the events take place in our beautiful Scottish countryside, set against the backdrop of rolling hills and quaint villages. Or in the case of the Inverary Highland Games, which we often include in our tours, the event takes place in the grounds of the magnificent Inveraray Castle.

The Grand Finale with a Difference

My favourite day at the games was at the Strathardle Highland Gathering in lovely Perthshire. I had spent a brilliant day sitting in the sunshine enjoying the bag pipes, the races and the cake stand (of course)… when a voice was heard across the speakers informing us it was time for the grand finale. I had no idea of the spectacle I was about to witness, but I really was in for a treat. The spectators gathered at the main arena. I watched with some confusion as a dozen cars drove into the arena and lined  up nose to tail around the perimeter. A young boy ran onto the middle of the arena and randomly placed batons on the ground. The audience cheered with excitement.

Music started to play and each car began driving slowly round in a circle. Then suddenly the music stopped and the drivers slammed on the brakes. 12 passengers flew out of the cars and ran onto the arena in search of 11 batons, yep you’ve got it, I was watching a game of Musical Cars!

The losing car left and a baton was removed. The game continued until there was just one baton and two cars left. The drivers tried to strategically place their cars at just the right point in the arena to give their passenger a fighting chance. The music stopped for the final time and the two passengers raced for the baton, the winning passenger beating the other contestant by barely half a second. The crowd roared in a mixture of cheers and boos and the winning team jumped together as if they had just won a world championship. What a brilliant event. I can’t promise you will see Musical Cars at every Highland Games, but I am sure there are equally ridiculous and funny activities elsewhere. 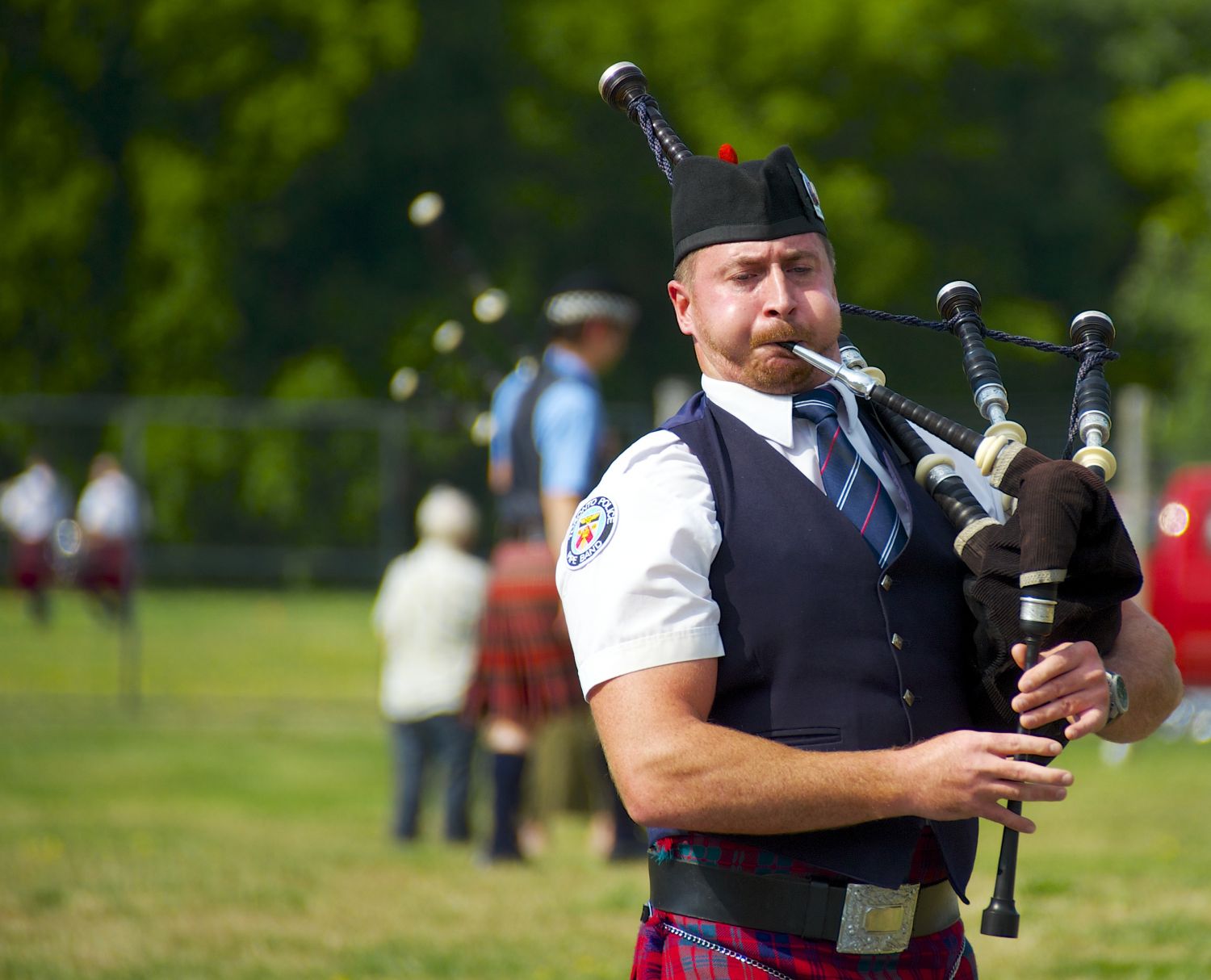 There are usually a few events on the day which spectators can get involved in. Whether its tug o’war, a mini race or a throwing event, it is a great opportunity to add some competitive fun to your day.

My biggest success was in ‘Tip the Bucket’. Imagine jousting with a wheelbarrow instead of a horse. A bucket of water is hung on a frame about 7ft high. One person (me!) sits in the barrow and holds a long wooden stick. Their partner runs with the barrow towards the bucket. The person in the barrow (still me!) tries to push the long stick through a hole in a board hanging below the bucket. Miss the hole and hit the board… the bucket tips and both you and your partner get a soaking. This may sound simple but aiming well while your partner is rattling you along the bumpy grass as fast as they can really adds to the challenge! I am proud to say we came second and won £1.50 each. Which almost made up for getting completely drenched in the final round… 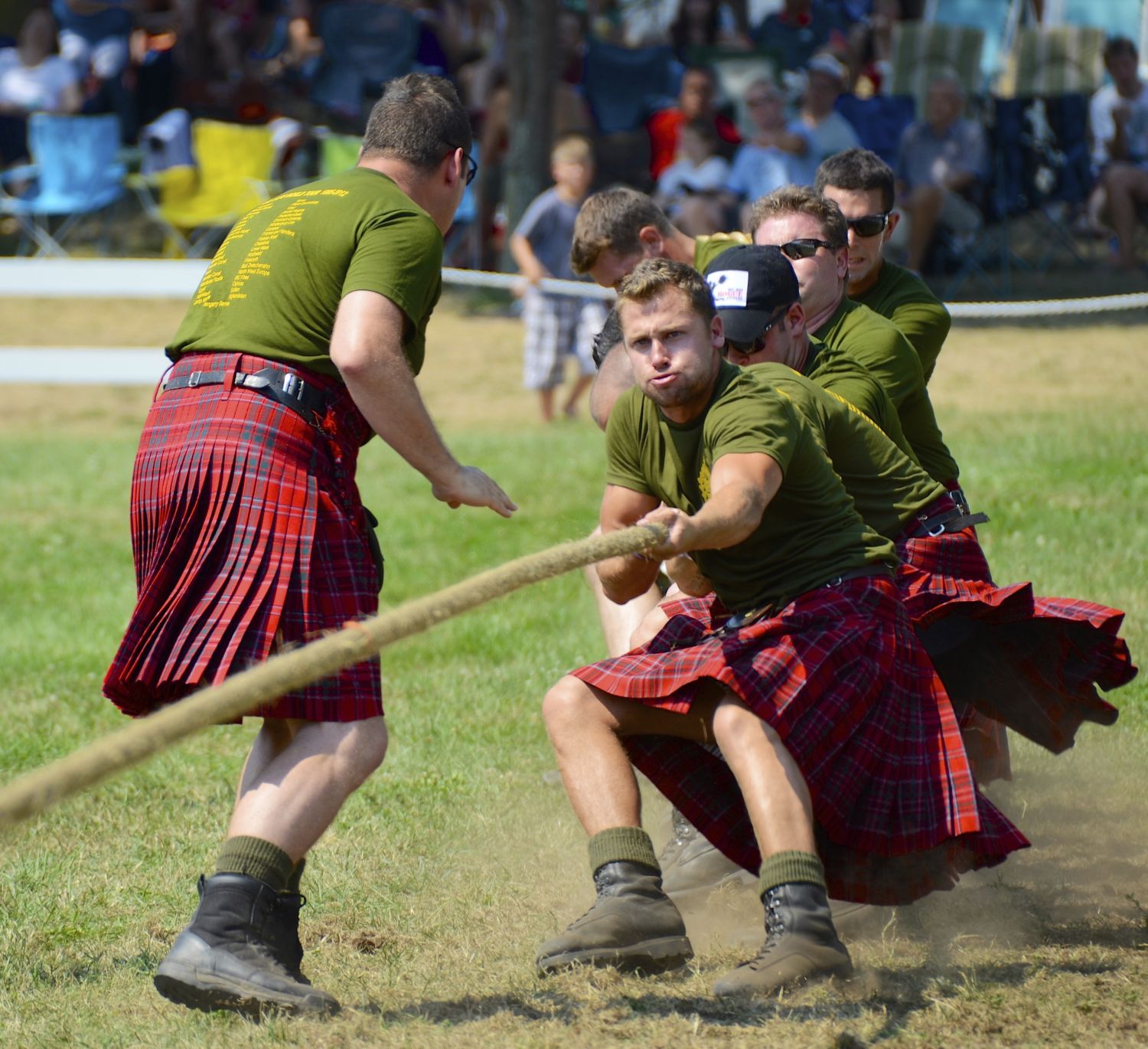 Soilders Pulling for their Regiment - Jamie McCafferty on Pixabay

The biggest event in the Scottish Highland Games calendar takes place in the very location where King Malcolm III first set up the competition for his royal messenger. A hill race takes place today, drawing competitors from all over the UK and Europe. The Braemar Gathering attracts thousands of spectators every year, often including the Queen and Prince Charles. You can expect a sea of kilts; bagpipes and drums in profusion; our very best highland dancers and of course a wee dram of whisky. It really is the most Scottish event you can attend.

If you are visiting Scotland during the first Saturday in September, check out our 7 Day West Coast Islands & Braemar Gathering Tour. Alternatively, request a Highland games event as part of your Custom Tour. In recent years we have visited the Luss Highland Games near the bonnie banks of Loch Lomond; the Gordon Castle Highland Games (yes another fabulous castle venue!) and the Isle of Skye Highland Games situated at Sron a’Mill which translates to ‘The Lump’. Don’t worry, this naturally formed amphitheatre is much more appealing that it sounds.

We can't wait to welcome you to Scotland! 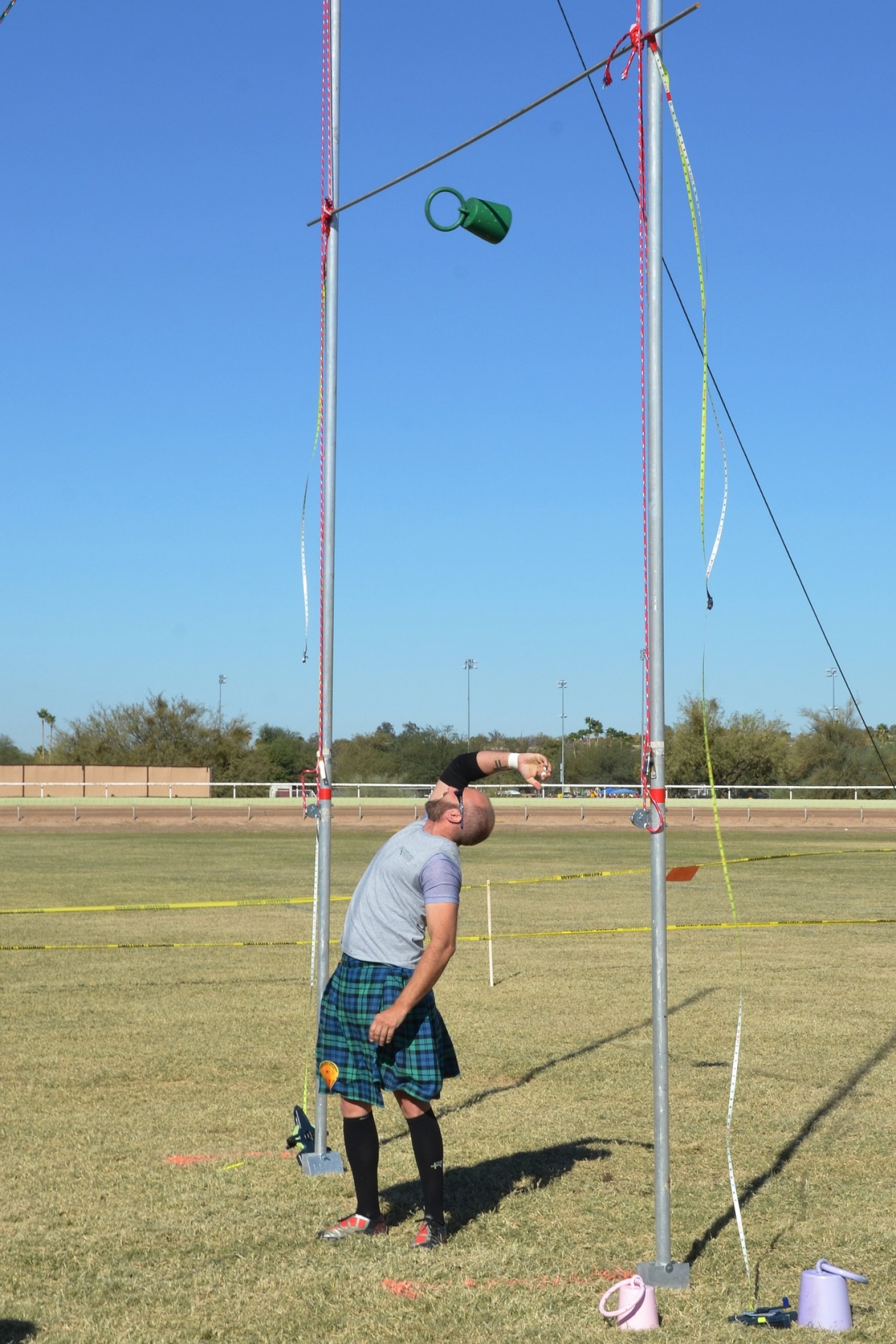